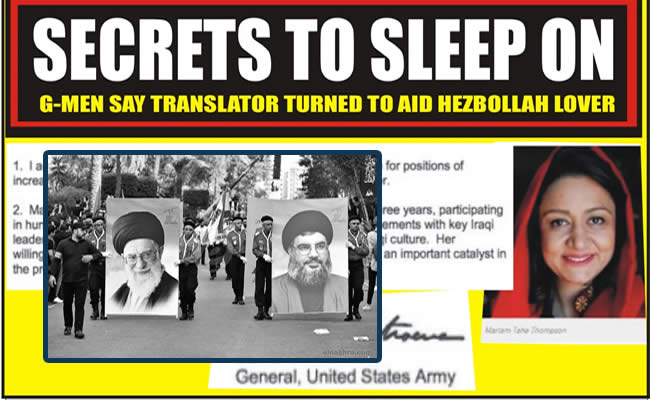 The National Council of Resistance of Iran (NCRI), and the People’s Mujahedin of Iran (PMOI / MEK Iran), reported that the Sixty-one-year-old US military linguist Mariam Taha Thompson appeared in federal court in Washington recently. She was accused of having a list of secret informants that she communicated to the Iran-backed Lebanese Hezbollah group.

Thompson was arrested on 27th February in Irbil in Iraq. Hailing from Rochester in Minnesota, Thompson was in Iraq where she was assigned to a US military facility on a special operations task force.

The Department of Defense said that it was aware of her arrest and indicated that it would be cooperating with the investigation into this woman.

From the end of December, she is said to have researched and leaked names during a six-week period. This coincides with the time that the United States initiated airstrikes with Iran-backed forces in Iraq as the target. These events signified a continuation of the tension between the two nations.

The Department of Justice said that Thompson shared a list of names with the Iran-backed Hezbollah group and that as a result, she faces three charges relating to the violation of espionage laws.

The highest national security official in the Department of Justice, Assistant Attorney General John Demers, described Thompson’s conduct as a “disgrace” and said that her betrayal of her colleagues and her country will result in her being punished for her actions.

The Department of Justice said that the lives of United States military personnel and human assets were put in grave danger because of Thompson’s conduct.

The department indicated that Thompson accessed almost 60 files on human intelligence sources and said that there was no reason for her to consult them. She was able to see the names, images, and other personal and identifiable information about the intelligence sources in the files she accessed.

FBI agents searched her living quarters in February and found a note under her mattress. The note was handwritten and was in the Arabic language. It contained the names of several intelligence informants for the United States and advised that these individuals be monitored, especially with regards to their phone activity.

In an interview with the FBI, Thompson told investigators that she had memorized the classified information, written it down, and then passed it along to a Lebanese foreign national. She said it was passed along through a secure messaging application that she accessed on her mobile phone. Shortly later she recanted her statement and said that she was sure she had not in fact relayed the information to anyone.

The investigators however are confident that they have a solid case against her.

The Iranian regime has numerous proxy groups and militias across the region. It relies on these terrorist organizations to advance the regime’s regional goals and it wastes a huge amount of the country’s wealth to do so.