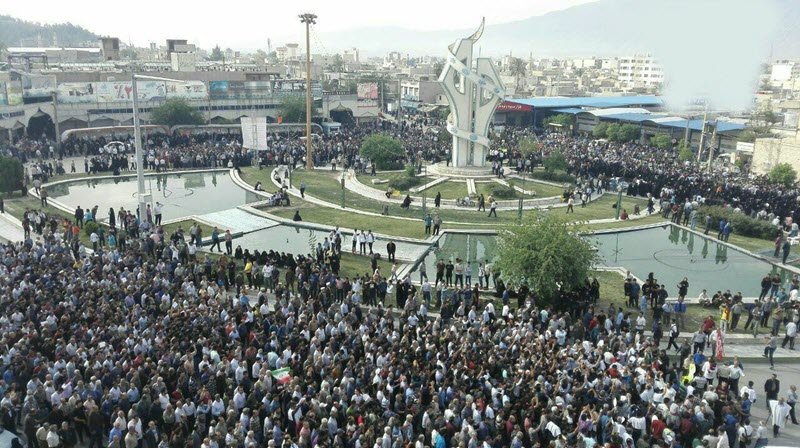 by Navid  Felker
Following weeks of increasing tension in Kazerun in the Fars province in Iran, people have taken to the streets in protest. Authorities have tried to get the people to disperse, but its attempts have failed. In fact, they have backfired on the regime and the people are resisting its violence. The security forces have arrested many individuals and many protesters have been injured after shots were fired. The security forces also attacked protesters and there have now been reports of a number of deaths.

The brave people of Iran have always resisted the regime’s violence and as usual they are unarmed. Hospitals in the area are full of injured protesters and there have been reports of many people going missing.

Reports show extreme violence against the people, but the regime has proceeded to get rid of as much evidence as it can.
Protesters warned the authorities that they would get justice for those that were killed and analysts say that the protests are part of a much wider sentiment of discontent in the country.
At the end of December last year and during January this year, millions of people in Iran took to the streets to voice their discontent with the leadership of the country and the mismanagement of the economy. The protests started in the city of Mashhad and spread quickly to other cities and even rural areas.

There were a large number of arrests during these protests and the people were chanting “Down with Rouhani” and “Down with the Supreme Leader”.
The public discontent since then has never disappeared and there are sporadic protests for various different issues popping up across the country. For example, many Iranian women are protesting the obligatory veiling and have carried out “White Wednesday” protests in which some remove their hijabs or replace them with white ones. Reports from activists in the country say that it is becoming increasingly common to see women appear in public without their veil.

Before his speech earlier this week, the US Secretary of State Mike Pompeo announced his support for the people of Iran and recognised their fight for freedom and human rights. In a message on Twitter he said that he supports the people of Iran who are “demonstrating against an oppressive government”. He also said that the regime’s tactics of cutting internet access to disturb protests and the deaths that have occurred as a result of the regime’s violence do nothing but show its true nature.
There is not one single reason for the protests in Iran. There are many issues that together or separately make the lives of the Iranian people harder than it should be. There is the economic corruption and mismanagement that has destroyed the country’s infrastructure and public services. Iran’s foreign policy is also a sticking point with the people who want to move their country into modern times, not be stuck in the past. And of course, the people are sick of the regime’s brutal suppression of the people. Political prisoners are killed and the people have no freedom. And they want change.