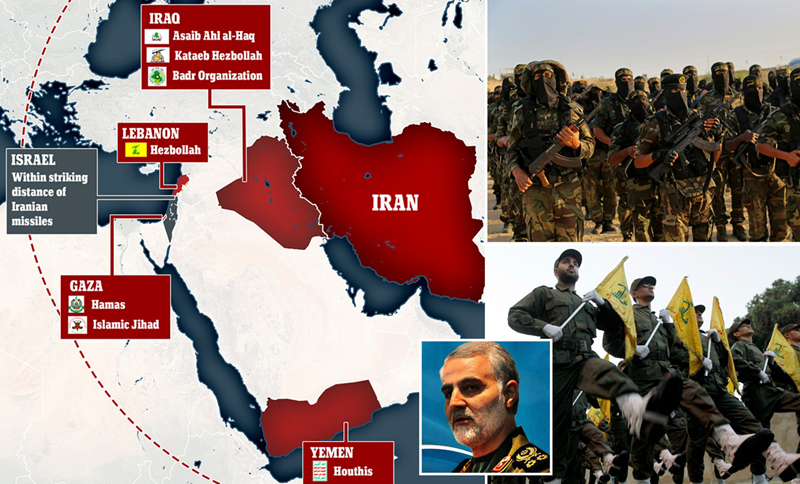 Analysts recently expressed their concern about the potential of the Iranian regime having a network of terrorist cells across Europe, the Middle East and beyond. There have been concerns that the Iranian regime has them prepared and ready to act should the regional crisis worsen.

The People’s Mojahedin Organization of Iran (PMOI or MEK), the main opposition and only viable alternative to the Iranian regime, has warned that Iran’s numerous proxy group will spring into action as the political situation continues to decline.

Much of Iran’s proxy network extends into Europe and even as far as the United States. The Quds Force, a branch of the notorious Islamic Revolutionary Guard Corps (IRGC), oversees all of the overseas operations.

The IRGC Quds Force is led by General Qassem Soleimani who reports directly to the country’s Supreme Leader – Ayatollah Ali Khamenei. The force is a substantial size, estimated to be around 20,000, and it is in charge of training the Iranian regime’s proxies that are spread across the world.

Tensions in the region are escalating with Iran having just announced that it has seized another tanker in the Persian Gulf. Although details regarding the incident are scare, it is believed that Iran has taken the crew and confiscated the fuel the tanker was carrying. Iranian authorities have said that the vessel was smuggling fuel.

There are concerns that the Iranian regime is going to increase its activity via its proxy groups because it is feeling increasingly pressured because of a number of factors. Firstly, the Iranian regime is under immense economic pressure due to the tough sanctions imposed by the United States. Secondly, on an international level, more and more foreign governments are speaking out about Iran’s belligerence and malign influence. Finally, the people of Iran are putting the regime under immense domestic pressure. They have made loud calls for regime change and they have made it very clear that they will not relent until the clerical leadership falls.

It is already known that the Iranian regime has been providing material support for a number of groups, in particular in Afghanistan, Lebanon, Saudi Arabia and Syria.

And during the course of 2018 alone, the Iranian regime had plotted a number of terrorist attacks on European soil. European intelligence agencies worked together and were thankfully able to foil the plots before there were mass casualties and deaths. But it is evidence that the Iranian regime is willing to put diplomatic relations to the side in order to further its agenda and consolidate its hold on power.

For those that believe appeasement is the way forward, it must be remembered that the regime’s pillars are suppression, terrorism and total repression. Moderation has never existed with the regime and it never will.