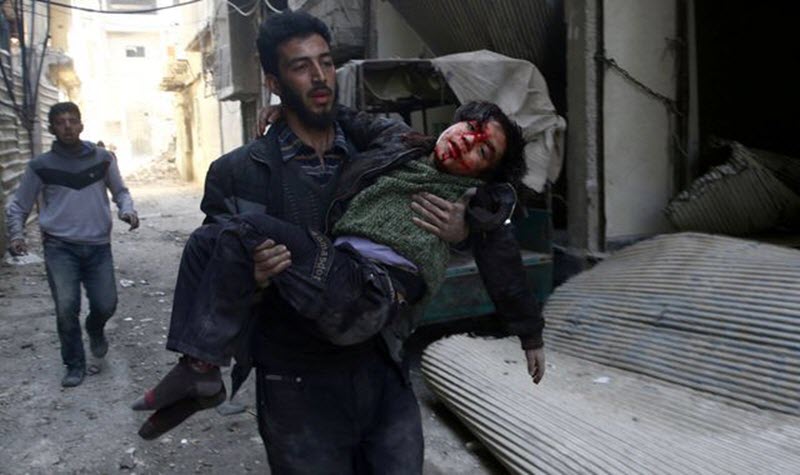 The UN Security Council that demanded a 20-day truce in Syria, after a wave of airstrikes, quickly adopted a resolution and shelling raised the death toll of a week of bombing in the area to 500, including women and children.

According to an article by Heshmat Alavi for Al Arabia, strong actions are needed to back-up such demands. He writes, “As the killings are appalling, we must keep in mind how Tehran is the driving force to maintain Syria as part of a dreamed Shiite-Persian empire. Iran continues to expand its foothold in Syria, while Arab countries across the Gulf, Germany and France are also being heard making strong demands. The European Union as a whole should also be making Iran understand such hostilities are unacceptable.”

Since the beginning of the Syrian war in 2011 Iran has placed support behind Assad’s dictatorship, and engaged Russia’s air support in 2015. Alavi says that this was a means “to ensure the regime’s survival, knowing its own rule would be threatened in the case of losing Damascus.” Alavi says further, that the Syrian opposition’s remaining strongholds are being focused on, after the fall of Aleppo and ISIS being routed from Raqqa, and that what he calls the “Tehran-Moscow-Damascus alliance” will seek to re-establish Assad’s control over Syria through Russia-sponsored peace, degrading an already weak UN-backed effort.

In December of last year, US National Security Adviser H.R. McMaster expressed concerns about “the prospect of Iran having a proxy army.” It has been reported that Hezbollah is building an armada of 100,000 rockets based in Lebanon and possibly in Syria.

While Qasem Soleimani, the leader of the IRGC’s Quds Force, recently boasted about “the eradication of Israel,” Tehran’s actions abroad were criticized during the recent protests that flared at home. Meanwhile, the Israeli military shot down a drone launched by Iran-backed forces earlier this month.

– In his speech before the European Parliament, Saudi Foreign Minister Adel al-Jubeir said that global collaboration was needed to prevent Iran’s interference abroad.

– US Vice President Mike Pence stated that Tehran remains the main state supporter of terrorism; warning that Washington will no longer tolerate Iran is destabilizing activities in the region.

– Chairman of the US House Foreign Affairs Committee Ed Royce, issued a statement upon his return from a Middle East tour, that emphasized the threat Iran poses for the entire region.

– German Chancellor Angela Merkel called on the European Union to increase pressure on Russia and Iran to end Syria’s violence.

These voices appear to understand the situation — that Iran is raising the stakes in Syria to use as leverage for possible future talks. However, the international community, and especially the European Union, should be concerned over this new wave of tension in the Middle East.