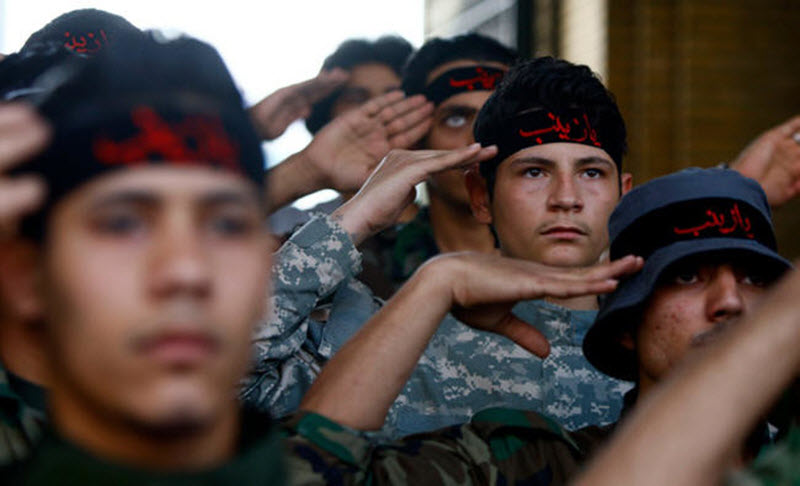 It is well known that the Iranian regime has dragged in Shiites from neighbouring countries to fight (and most likely die) in the Syrian war. It is all part of Iran’s plan for a Shiite Crescent across the Middle East, where Iran controls an area stretching from the Persian Gulf to the Mediterranean. Most media coverage focuses on the Iraqi recruits, but this article will cover the Afghan and Pakistani fighters in Iran-backed units in Syria.

The Afghans fighting in Syria are probably the most militant of the units commanded by the Iranian Regime and, as such, have the highest fatality rates. They are often used to attack the Syrian opposition and the largest unit, Liwa Fatemiyoun, is controlled by the Revolutionary Guards (IRGC).

The fighters are often recruited from the millions of Afghan refugees that live illegally in Iran and are subject to abuse, discrimination, and poverty. The Regime exploits them by promising them citizenship, steady incomes, and protection for their families. Those who refuse, risk arrest and deportation. Of course, Iran should have offered them citizenship and these basic rights decades ago, but the Regime needs vulnerable people to exploit.

Sadly, the Regime hasn’t even limited itself to recruit adult refugees to its proxy militias and Human Rights Watch has recorded that children as young as 14 are being used as cannon fodder in Syria, while other people have reported 12-year-olds in the unit. This is a clear crime against humanity.

There are at least 20,000 Afghan fighters in Syria and at least 2,000 have already died. These numbers are likely much lower than the actual rate.

Iran’s Pakistani militants are recruited from a mixture of sources; some from Shiite groups in Pakistan, which Iran has strong ties to since the US military campaign in Afghanistan in 2001, some from the Pakistanis living in Iran, and some who were deported from the UAE.

Ali Hajizade, a political analyst, wrote: “The participation of Pakistanis in the Syrian conflict, in part, causes confrontation in Pakistan. It shows that the involvement of Pakistanis as mercenaries in Syria also facilitates sectarian confrontations and violence within Pakistan. Fearing Pakistani intelligence services, Iranians are cautious about recruiting Pakistanis. They widely use websites and social networks. Iranians try to smuggle their new recruits out discreetly, also using boats. Of course, that does not work every time.”

The Iranian Regime often tries to present their IRGC-run Pakistani unit, Liwa Zainebiyoun, as volunteers who are merely defending the Sayyidah Zaynab Mosque, but there is evidence that they are actually involved in various offensive operations across Syria.

The Iranian Regime’s regional interventionism will not stop until they are expelled from the region, so these countries must help stop them in order to bring peace to the Middle East.