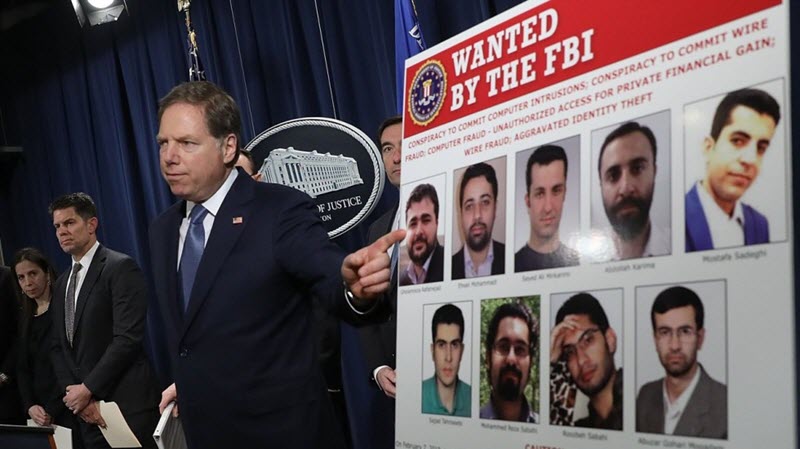 Hackers linked to the Iranian Regime have broken into the accounts of roughly 8,000 professors at hundreds of foreign universities, and US as well as employees at private companies and government entities, in a “massive and brazen” hacking scheme designed to steal massive amounts of data and intellectual property, according to the Trump administration.

On Friday, the Justice Department unveiled an indictment that directly links that hacker with the Iranian Regime, including some linked with the Supreme Leader’s private militia, the Revolutionary Guard Corps (IRGC).

The nine Iranians who were charged were also levied with sanctions by the Treasury Department, as was the company they worked for, the Mabna Institute, and a previously indicted Iranian who was charged with hacking into HBO.

The charges include conspiracy to commit computer intrusions, wire fraud, unauthorized access of a computer, and aggravated identity theft. The indictment also reveals that the Mabna Institute targeted more than 100,000 professors worldwide.

The Justice Department officials made clear that hacking was conducted under the order of the Iranian Regime, as the Mabna Institute was contracted by the IRGC.

Sigal Mandelker, the Treasury’s undersecretary for terrorism and financial intelligence, stated that the IRGC has always been a major player in the Regime’s sponsorship of terrorism.

He said: “The IRGC plays a central role in Iran’s maligned activities across the world, including fomenting terrorism.”

While Deputy Attorney General Rod Rosenstein said that the hacking had “benefited” the IRGC.

This is one of the biggest state-sponsored hacking efforts from the Iranian Regime, according to Justice Department officials.

Manhattan US Attorney Geoffrey Berman said: “(W)e have unmasked criminals who normally work in total anonymity, hiding behind the ones and zeros of computer code.”

It is unlikely that those charged will ever be put on trial for this crime, as Iran will not send them to face trial or to any country which would extradite them.

This all comes at a time when tensions between Iran and the US are notably higher than they have been in years, as Donald Trump has stacked his cabinet with Iran hawks and looks set to pull out of the 2015 nuclear deal in May.

Although, Iran’s malign cyber attacks were not part of the official text of the deal, it would be more evidence for Trump that Iran is violating the spirit of the deal.