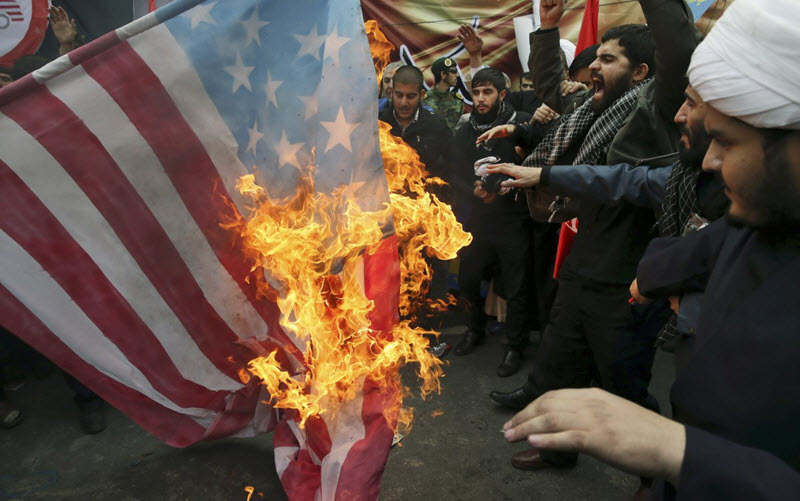 On November 4, the same day that renewed US sanctions against Iran came fully into effect, one particular protest in Iran caught the attention of Western media. The protesters burnt American flags, created effigies of Donald Trump, and shouted “Death to America”, so the press used the narrative that anti-US feeling in Iran had only increased since Trump puled the US out of the Iran nuclear deal, otherwise known as the Joint Comprehensive Plan of Action (JCPOA), in May, citing Iran’s violations of the agreement.

But that is not the full story; not even close. In fact, the Iranian Regime holds an anti-American protest every year on November 4, the anniversary of the 1979 hostage-taking at the US Embassy in Tehran – a violation of international law and an act of war. They always burn the American flag, mock American leaders, and scream “Death to America”. These protesters are also not ordinary citizens acting on their own volition; most often they are coerced by the Regime through force or bribes.

So, it’s strange that the media chose to focus on this rather than the hundreds of anti-regime protests happening that day, where the majority of ordinary Iranians voiced support for the sanctions that would punish the Regime, but “Death to America” does grab more eyeballs in the US.

Of course, the Iranian Regime doesn’t limit itself to mere threats; it often tries to carry them out. Over the past 40 years, Iran has launched numerous attacks on the West, from the bombing at the US Marine Barracks in Lebanon in 1983 to the IED attacks on US-led forces in Iraq in the early 2000s to the numerous attacks on Iranian dissidents in the US and Europe. And that doesn’t even take into account the fact, here Iran has been the leading state sponsor of world terrorism since 1979.

Iran doesn’t attack the West because they are upset at the policy decisions of one leader. They do so because they hate everything the West stands for; freedom, democracy, and equality. Even those who originally stood by the nuclear deal and tried to save it are beginning to acknowledge this.

The Iranian Regime needs the benefits from the deal to have even the slightest chance of saving the failing Iranian economy, but that didn’t stop them from plotting (and nearly carrying out) a bombing at the National Council of Resistance of Iran (NCRI) rally near Paris in June, where almost 100,000 people would have been killed or wounded. The Regime hates the NCRI so much that they could not stop themselves from attacking them, even though it could mean that Europe abandons the nuclear deal too.