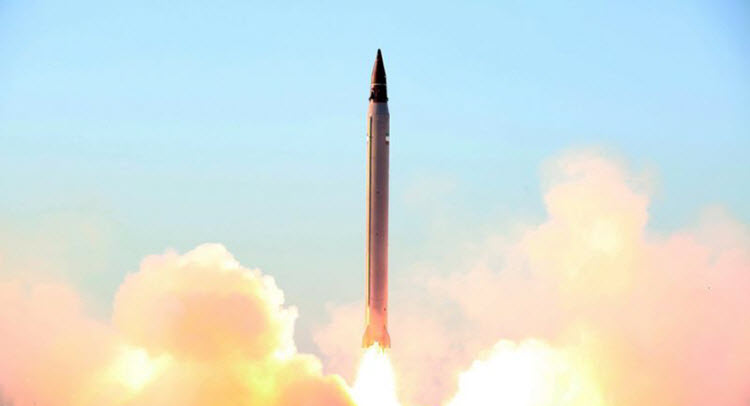 Iran’s medium-range missile strikes, alleged to be the official response to the June 7th twin attacks that the regime claims were staged by ISIS in Tehran, have been in the news recently.  However, some say that Iran may be showcasing its ability to take on ISIS as well as sending a message to its adversaries, especially Washington, or that it might be an attempt to maintain a show of force against increasing domestic and foreign crises.

Heshmat Alavi, in his article for The American Thinker writes, “Iran last resorted to such drastic measures of launching ballistic missiles from its soil back in the final days of the Iran-Iraq war in 1988 after suffering major defeats, and once again in 2001 against former bases of the Iranian opposition People’s Mojahedin Organization of Iran (PMOI/MEK) in Iraq in response to a vast opposition camp inside the country. This proves Tehran will fall to such lows when pinned against the wall as a last resort.”

Alavi wonders why would Iran launch expensive medium-range missiles, when it has not yet perfected a precision guiding system. In fact, three of the seven missiles landed in Iraq and three others were far off their targets in Deir Ezzur.  He writes, “…why the need to use such poorly guided medium-range missiles from their own turf?”

He claims that this was a publicity stunt following the June 7th attacks, and Iran is taking advantage of the entire scenario to accelerate a domestic crackdown and justify their meddling in the Middle East and beyond, according to his articles in a Forbes and Al Arabiya English . Further, he says that, “Iran mainly intended to deliver a message to Saudi Arabia. Iran’s Revolutionary Guards (IRGC) accused Riyadh and also Washington over the June 7th attacks.”

Iran’s leaders are pragmatic. They  launched the missiles into the deserts of eastern Syria, taking care not to target Saudi Arabia or American interests in the Middle East.

Still, the missile launching helped to save face for the Iranian regime’s senior hierarchy and IRGC, after setbacks such as:

-The election of Donald Trump as President of United States and the end of the Obama administration’s era of appeasement.

-Iran being placed “on notice” by the Trump administration.

-Possibly most significant of all, at a time when the Trump administration continues to weigh its comprehensive Iran policy, Secretary of State Rex Tillerson stating in a House Foreign Affairs Committee that Washington will support elements inside Iran seeking peaceful regime change.

These setbacks resulted in desperate measures.

Meanwhile, the PMOI/MEK, under the political umbrella of the National Council of Resistance of Iran (NCRI), is preparing for their July 1st annual freedom rally in Paris, where more than 100,000 Iranians and hundreds of American, European and Middle East dignitaries will gather to voice their support for NCRI  President Maryam Rajavi and her Ten-Point Plan for the future of Iran.  Mrs. Rajavi’s Plan includes gender equality, peaceful coexistence, abolishing capital punishment, torture and crackdown, and bringing an end to Iran’s nuclear program, meddling and support of terrorism.