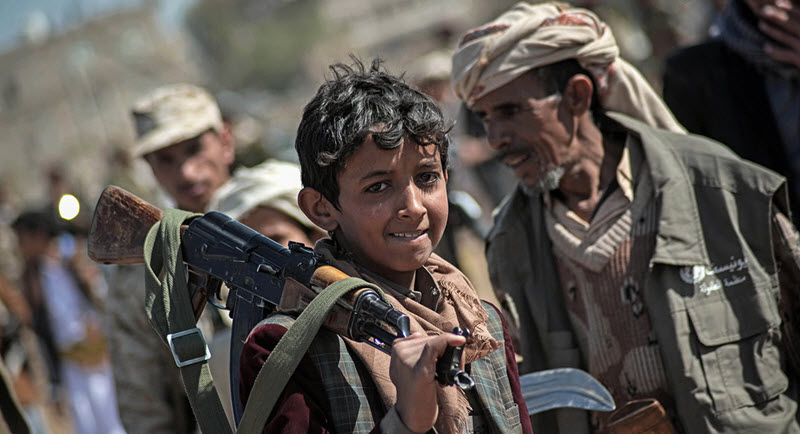 Iran has been involved in the bloody war in Yemen for many years, even back in 2009. The former president Ali Abdallah Salah had criticised Iran for supplying the rebels with funds and arms.

Four years later, the nation’s security forces and coast guard intercepted a huge number of weapons that were being transported to Yemen from Iran. There were dozens of tons of Iranian-made weapons onboard the Jihan 1 ship, including many high explosives, RPGs and RPG launchers, 122mm Katyusha rockets, electronic equipment for detonating IEDs and shoulder-launched anti-aircraft missiles (MANPADS).

The following year, it came to light just how involved Iran was. Several Hezbollah operatives were arrested for training Houthi rebels in Yemen. They were part of a unit that is modelled on Iran’s Quds Force. They were highly trained individuals that were able to speak the language of those that they were training. The Hezbollah unit had also sworn to be faithful to the Iranian regime’s goal to export its revolution.

Hezbollah is one of Iran’s most faithful militias and it has been working on Iran’s behalf in Yemen too. It is providing the Shiite opposition, the Houthis, with extensive support with the aim of getting rid of President Abd Rabbuh Mansur Hadi – a president who has declared himself to be anti-Iranian.

But why does Iran have such an interest in Yemen? Again, it is down to its quest for regional dominance and it sees the opportunity to install a regime that will be loyal to Iran.
Yemen is a strategic location for Iran because of its access to the Red Sea. Its geographic position also means that it could threaten neighbour Saudi Arabia. Furthermore, a military presence in Yemen would allow Iran to supply and move weapons in the area with ease.

Experts say that Iran has been able to continually supply Houthi rebels with weapons. The Houthis, eighteen months ago, revealed their new ballistic missile that they claimed to have made themselves. It was called a Burkan-2H, had a range of 800 kilometre and was able to carry a 700-kilogram warhead. Two of these were fired into Saudi Arabia but were intercepted before they did any damage. In November last year, another supposed Burkan was launched towards the Saudi capital’s international airport. Experts concluded that the missile is based on Iran’s Qiam missile.

Nikki Haley, the United States Ambassador to the United Nations, presented evidence to other UN ambassadors about markings on a missile that had been launched in July. The markings were confirmation that Iran has indeed been involved in the production and design of the missiles – a claim that Iranian regime officials have dismissed as “fabricated”.

Officials in the United States and several leaders in the EU have said that Iran’s belligerence and meddling in the affairs of other nations in the regions needs to be addressed. The involvement of the Iranian regime in conflicts in the Middle East is doing nothing but worsening and prolonging the bloodshed.