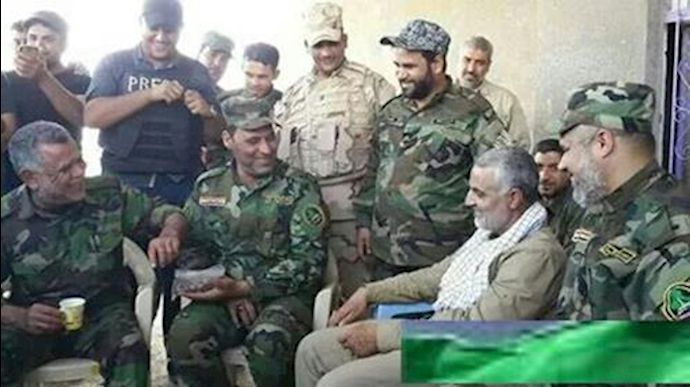 by Saeed
While many people around the world were shocked by Syria’s Assad regime using chemical weapons against innocent civilians, the strikes against Assad’s chemical sites by U.S., Britain and France ended with what some call “the unpleasant policy of appeasement” in that it allowed the the Ayatollahs in Tehran to remain unaffected.

Iranian regime’s officials call their meddling in Syria and other neighboring countries an attempt to keep the danger away from their own borders. But, Iran’s interference in the region has has escalated over the past decade.

In an interview with Sky News TV, that was broadcast on February 4th, 2018, Deputy Revolutionary Guards (IRGC) chief General Hossein Salami said, “The two armies of Iraq and Syria are considered the depth of Iran’s strategy,” he said. “It is not logical for a country to close its security circle inside its borders. The best strategy is to fight the enemy at a distance.”

Adviser to Iranian Supreme Leader Ali Khamenei, Ali Kabar Velayati, told the same TV station that his country’s influence in the region was definite and they would not step down. “Iran is trying to be the major effective force in the Middle East,” he said. “If it was not for Iran’s assistance, the two countries (Syria and Iraq) would have collapsed.” Previously, Velayati had said, “Should we have not provided aid to the Iraqi and Syrian people, we would face a conflict worse than the (1980-88) war with Iraq. The enemy had come as close as 20 km from our borders and we pushed them back up to 50 km.”

In January, a secretary to the Supreme Leader, Mohammad Golpaygani, claimed that IRGC Quds Force chief Qassem Suleimani was preparing and organizing suicide volunteers to be dispatched on missions abroad.

In a speech on November 23, 2017, Khamenei said, “The Islamic Republic of Iran would rush to the support needed anywhere for the fight against heresy and arrogance.”

In fact, in 2015, President Hassan Rouhani, himself, said, “Iran has helped establish security in Iraq, Syria, Lebanon and Yemen.”

Iran’s involvement in Syria affects its people, and those of Syria. At a Paris conference organized by the National Council of Resistance of Iran (NCRI), the largest and most organized the Iranian opposition groups, senior Syrian opposition figure George Sabra said, “The paws of fundamentalism, sectarian and terrorism is in Baghdad, Damascus, Beirut ad Sana, while its head is in Tehran.”

During the conference, NCRI President Maryam Rajavi said, “Khamenei and IRGC commanders have repeatedly said should they not fight in Syria and Iraq they have to line up in Tehran, Hamedan and Isfahan… Despite all the repression and arrests they have imposed on the society, the people’s uprising has put them in a constant state of horror.”

Mrs. Rajavi urged the European Union to insist on the expulsion of the IRGC and its proxies from Syria and other countries in the region, as well as to stop Iran’s missile programs.