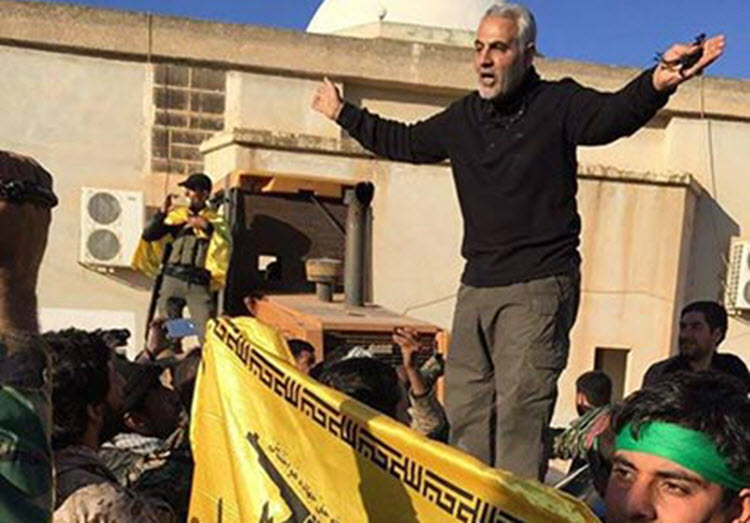 Al Arabiya Television reported that Iran is in Aleppo to visit the Iranian regime’s affiliated military units that are fighting in the city. There is a video proving Soleimani’s presence there.

This news comes just two weeks after Assad’s fighters and foreign militias commenced an intensive effort to take control of the city.

Militants in Iraq confirmed that the Iranian regime has sent a lot of manpower from Iraq to Syria. They also say that when battles in Iraq finish they will then to go Syria to help out Assad’s regime.

Most of the world is looking on in horror at the inhumane treatment of innocent lives in Aleppo, but high officials in the Iranian regime are congratulating each other.

In a message to Qassem Soleimani, Mullah Ali Shirazi, Khamenei’s representative in the IRGC Qods Force, said that the regime was “proud” and he described an “unmatched triumph”.

He also called on the armed forces that have been sent to Aleppo to hold prayers of gratitude, calling them “defenders of the shrine”.

The Iranian regime has often called their forces in Syria “defenders of the shrine” despite the fact that the city of Shrine is hundreds of kilometres away.

Reports indicate that the Iranian regime’s forces in Syria have killed hundreds of civilians including women and children.

In the Kolasse are of Aleppo, all medical staff at the Al-Hayat hospital are said to have been executed. Local emergency organisations say that bodies cover the streets of Eastern Aleppo and the cries of people dying and stuck under rubble are heard.

It has been said that nearly 2,000 people have been executed and around 600 women have been arrested or are missing in the past few days alone.

The mullahs regime in Iran has meddled in the affairs of other Middle Eastern countries too. It must be evicted from these other countries before more civilians, including women and children, are caught up in the bloodbath.