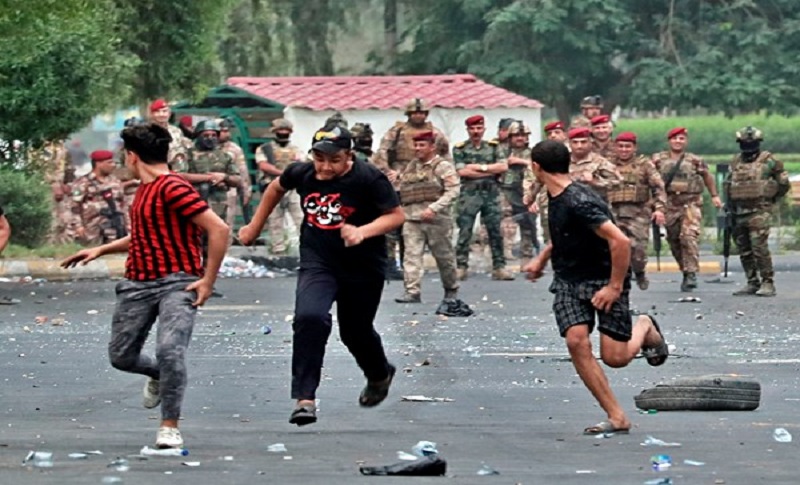 Iran commanded snipers that killed dozens of protesters during recent anti-government protests in Iraq, an exclusive report from Reuters reveals. Reuters spoke to different Iraqi security officials, who confirmed the reports and commented on the role of Tehran is meddling in Iraq’s affairs.

Demonstrations erupted in various Iraqi cities in early October in protest to chronic shortages of jobs, electricity and clean water, as well as the violent intervention of Iran in their country. The protests quickly turned into a confrontation between the people and security forces and led to at least 200 deaths and 7,000 injuries. Iran-backed militias had a decisive role in quelling the protests.

Iran commands an array of militia groups in Iraq, which have a sizeable military and political clout. These militias have grown in size and power as Iran continues to spend a vast amount of resources to expand its influence in its western neighbor. They sometimes operate in conjunction with Iraqi security forces but retain their own command structures.

“Militiamen clad in black shot protesters on the third day of unrest, when the death toll soared to more than 50 from about half a dozen,” Reuters reported, quoting an Iraqi security source who attended daily government security briefings. The fighters were directed by Abu Zainab al-Lami, head of security for the Hashd al-Shabi (Popular Mobilization Forces), a group of militia forces backed by Iran. The Hashid leader was tasked with quashing the protests by a group of other senior militia commanders, the source told Reuters.

A Reuters cameraman also reported having directly seen black-clad snipers opening fire on protesters in Baghdad’s Tahrir Square. Reuters sources also confirmed that the snipers were using equipment provided by the Iranian government and were running their own private communication network.

In previous reports, two Iraqi MPs asserted that Qassem Soleimani, head of Iran’s Revolutionary Guards (IRGC) Quds Force, was present in Iraq and was commanding the crackdown on protesters and the murder of Iraqi demonstrators during the recent protests spreading across central and southern Iraq.

Iran’s role in responding to the demonstrations was another reminder of Iraq’s importance to Tehran’s rulers. Since 2003, when the U.S. invaded Iraq, Iran has proceeded with a silent occupation of the country through its many militias, intelligence agents and front organizations, who have infiltrated Iraqi parties and politics.

Recently, the National Council of Resistance of Iran (NCRI) revealed that the mullahs’ regime uses humanitarian or charity organizations and institutions, in addition to its official organizations such as embassies and consulates, as a cover for the terrorist Quds Force to intervene in neighboring countries, especially Iraq.

According to the NCRI, the IRGC has institutionalized its presence in Iraq through the “Holy Shrines’ Reconstruction Headquarters,” which ostensibly works to reconstruct the shrines of historical Shiite leaders in Iran, Iraq, and Syria.

The most important such shrines in Iraq are particularly exploited by the organization during the important religious ceremonies of “Ashura” and “Arbaeen.” The Reconstruction Headquarters is one of many cover organizations that are used to advance the IRGC Quds Force’s objective in Iraq and elsewhere.

Iran’s meddling in Iraq has resulted in outrage among the Iraqi people. Many of the protesters in recent unrest were Iraqi youth who were very young during the 2003 conflict or were born afterward and have been suffering from Iran’s influence their entire life. They want a fundamental change in their country. The protesters called on Baghdad to sever relations with Tehran. During the October protests, many demonstrators were chanting, “Iran leaves, let Iraq be free.”