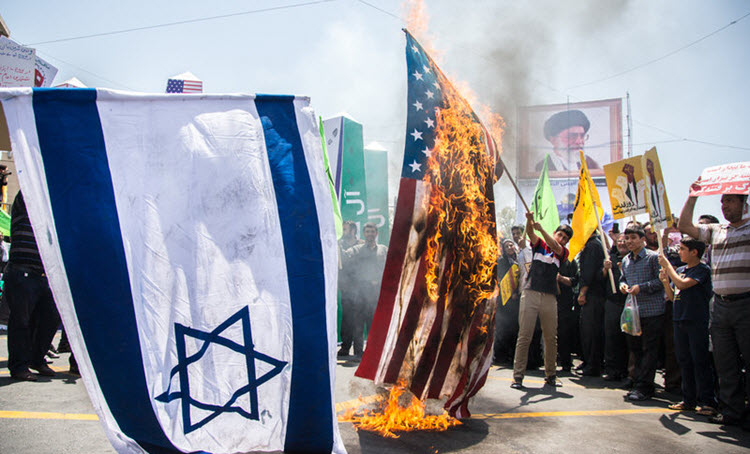 Iranian Supreme Leader Ayatollah Ali Khameini, in reference to him pinning the blame on the United States for the current issues in Aleppo, has reiterated that the eradication of Israel is primordial to him. In a message on Twitter he said: “As I‘ve said before, if Muslims & Palestinians unite & all fight, the Zionist regime will not be in existence in 25 years.”

He goes on to emphasise to readers that he is working towards the obliteration of Israel. In another Tweet he said: “Despite involvement in some regional issues, Iran has specified #Palestine issue priority of Muslim world & meets its duties in this regard.”

In another Tweet, Khamenei accuses the United States of blaming Islam for the current crisis in Syria. He said: “Propaganda of US & its regional allies seeks eruption of various more conflicts & introducing faith as a factor in crises is a lie.”

He added: “Sunni people of #Aleppo, #Mosul & other cities have been & are being massacred by criminal Takfiris, thus crises are not about Shia or Sunni.”

Many politicians in the U.S., including numerous conservatives, have been pointing out that President Obama is claiming that Iran has a “moderate” rule and that is why the nuclear deal has freed up so many sanctions. However, the messages spread by Khameini prove that this is not the case. A leader who wants to destroy another country is not part of a “moderate” government.

Khameini said that it was “God’s will” that several U.S. sailors were captured by the Iranian Revolutionary Guards (IRGC). Furthermore, Khameini praised the IRGC for the “victory” and attempted to humiliate the United States by awarding the guards with medals.

President-elect Donald Trump has opposing opinions to President Obama about the Iran nuclear deal. He said during the election campaign that he is prepared to renegotiate the deal, or at worst, scrap it. He has said that the deal is the worst one he has ever seen. However, Trump has already moderated some of his views since he won the race, so it remains to be seen if he will keep his word.