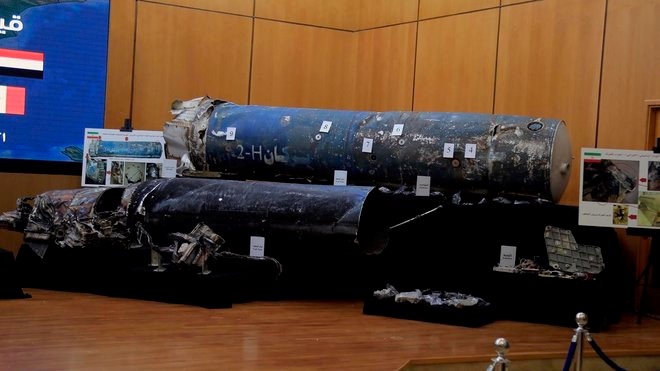 by Atousa Pilger
The spokesman for the Saudi-led coalition announced during a March 26th briefing that Iran is smuggling Sayyad-2 surface-to-air missiles (SAMs) to Yemen’s Ansar Allah (Houthis) rebel group. An Iranian Sayyad-2 SAM that Saudi Arabia says was to be smuggled to Yemen’s rebels has been displayed as part of a presentation. This is clear evidence that Iranian weapons are turning up in Yemen. Colonel Turki al-Maliki displayed the missile, which was labelled as a Sayyad-2C. It was part of consignment that was intercepted in an intelligence operation before it could reach the rebels. It was missing its nose and fins.

First unveiled in November of 2013, the Sayyad-2 is used with Iran’s new Talash air defense system. The missile appears to be a ground-launched derivative of the RIM-66 (SM-1) naval SAM that is in service with the Iranian navy, but not its Saudi counterpart.

Images that appear to show a manual and components made by Rizmoj Sanat, were also displayed by Colonel Maliki. Rizmoj Sanat is an Iranian company that produces radars and other aircraft tracking systems, which were also were seized in the same consignment.

The colonel previously stated that a Saudi F-15 multirole fighter was hit by a SAM — but survived — while flying over Sadah airport in northern Yemen on March 21st. He did not, however, say that the Sayyad-2s had been used in Yemen. He did say that the missile used in the engagement was not previously in Yemen’s air defense inventory.

Ansar Allah released a video to claim the attack. A composite video that includes FLIR footage allegedly showing the attempted shoot down of what should be (based on claims) a flight of two F-16E/F Block 60 of the UAE Air Force flying over Yemen’s capital city of Sanaa has emerged on March 27th. It showed an R-27T medium-range air-to-air missile being fired from a ground launcher. This may indicate that the group has turned missiles delivered for Yemen’s MiG-29 fighters into SAMs. In the video, the missile appeared to hit an aircraft which began to trail smoke, but continued on its course.

Colonel Maliki also identified Ansar Allah’s Badr-1 system as the launcher for the Sayyad-2 and showed aerial surveillance footage of one being destroyed near Sanaa’s airport on an unspecified date.

The Sayyad-2s may be responsible for the recent improvement in rebel air defense, but this is unclear at this time.