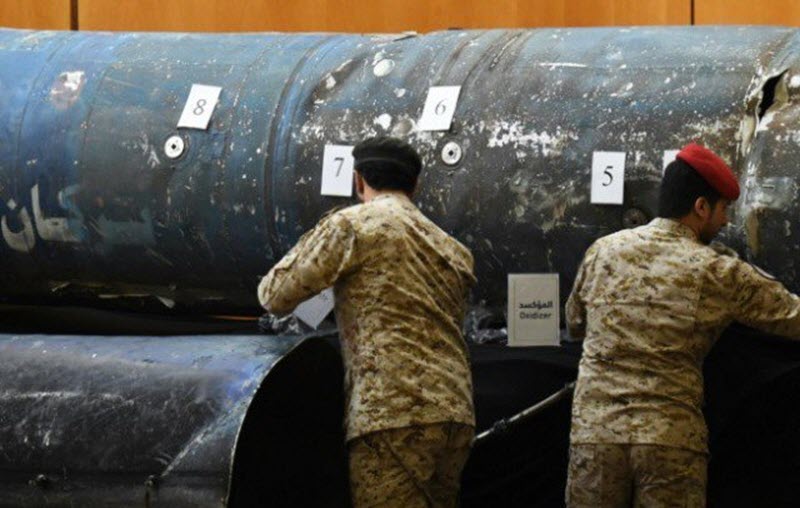 Earlier this week, the Saudi Arabia-led Arab coalition stated that Iran has been involved in the manufacturing of weapons used by the Houthi rebels in Yemen. It said that the that debris of the missiles the Houthis fired can be traced back to weapons manufactured near the Iranian capital. The comments were made at a news conference with the participation of ambassadors of the military alliance.

The coalition slammed Iran for creating a security crisis in the Middle East by arming the rebels with ballistic missiles and sophisticated arms.

Col. Turki Al-Maliki, the group’s spokesperson, showed the debris of the missile that has targeted the Saudi capital and said that forensic analysis confirms suspicions that Iran supplied the weapons.

He also presented a missile that the coalition forces seized as it was on its way from Iran to the Houthi rebels in Yemen.

Col. Turki Al-Maliki described the attacks on the kingdom as a “threat to regional and international security” and a “serious escalation”. He said that Iran is being hostile by smuggling arms to rebels in Yemen and it is evidence that Iran is providing extensive support to armed militias and proxy groups in the region.

He said that more than three-quarters of the missiles (over a hundred in total) that have been launched from Yemen with Saudi targets have come from Saadah and areas north of Amran. Furthermore, the capital’s airport has been the launch location for several other.

The day after the attacks, Al-Maliki gave details about the missile attacks saying that seven missiles were clearly linked in one way or another to the Iranian regime. The missiles were all launched from Yemen towards different places in the kingdom. Three had the kingdom’s capital Riyadh as a target, another one targeted Khamis Mushayt, another targeted Najran and two were headed towards Jazan.

The missile that had the capital city as a target killed a civilian and injured two others. The target was a residential area.

He added that the coalition will continue to work towards a complete restoration of legitimacy in Yemen and maintained that Saudi Arabia is providing relief to those that need it there. The goal, he added, is to restore stability and ensure peace in the country.

Iran is meddling in several conflicts in the region and is increasingly using proxies and militias to act on its behalf. The Iranian regime’s quest for regional dominance is getting out of hand and the international community has failed to act accordingly, especially faced with its violations of international law.

US President Donald Trump has warned Europe and Iran that the US will pull out of the 2015 nuclear deal if Iran’s ballistic missile program is not addressed.