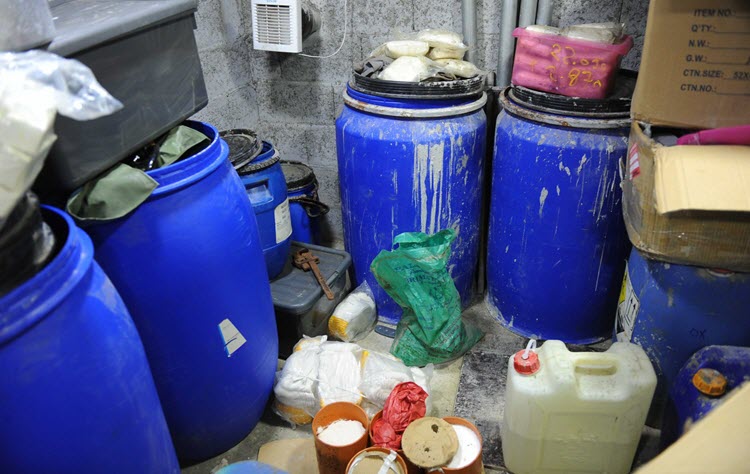 In September 2015, a bomb-making facility was discovered in a warehouse in Bahrain. Officers found chemical precursors and military-grade explosives.

They found armour-piercing projectiles that could slice its way through a tank and there were a large number of boxes of C-4 (military explosive).

Investigators in the country said that items like this had never been seen before there. In a report about the arsenals seized, investigators said that the firepower and caches found were a “game-changer”. The investigators also said that up against lightly armed police, the amount of arms seized was “overkill”.

The report indicates that the tiny nation of Bahrain – a resolute US ally – is facing a real threat from Iran with the emergence of militant cells that are Iranian funded and armed.

For several years now there have been a growing number of arrests with regards to the planting of roadside bombs and the smuggling of explosives and weapons. Until now, officials in the West were cautious about mentioning Iran in relation to these activities. Bahrain, on the other hand, has long accused the Islamic Republic of being involved.

However, officials in the West are losing their reluctance to accuse Iran because there is no doubt that Iran is involved. Intelligence officials have said that Iran’s Islamic Revolutionary Guard Corps (IRGC) has been training Bahraini militants in guerrilla warfare and advanced bomb-making techniques.

There are forensic links between the sophisticated weapons found in Bahrain and Iran. There are many similarities between the way Iran is dealing with militias in other countries such as Iraq, Syria and Yemen. Iran’s destabilisation efforts in these countries is exactly how operations are being carried out in Bahrain.

The US State department said last month while announcing the latest sanctions that Iran is training, funding and providing weapons to Bahraini militants and the Bahraini police chief said that Iran is trying to undermine its “security and stability”.

To overcome its unreliable reputation, officials in Bahrain have encouraged the sharing of evidence and have went after outside, impartial scientific analyses in order to convince the Western governments that the country is facing a real threat.

Several scientific analysis reports show that Iran’s distinctive markings were found on the grenades, arms and ammunition. Its markings were also found on electronics in improvised explosive devices.

Iran has not commented directly on these claims, but in the past officials have spoken about Bahrain in the plans of the Iranian regime. Last March, Saeed Qassimi – senior IRGC commander – said (in public) that Bahrain is an “Iranian province separated from Iran as a result of colonialism”. He also said that Iran is a base “for the support of revolution in Bahrain”.