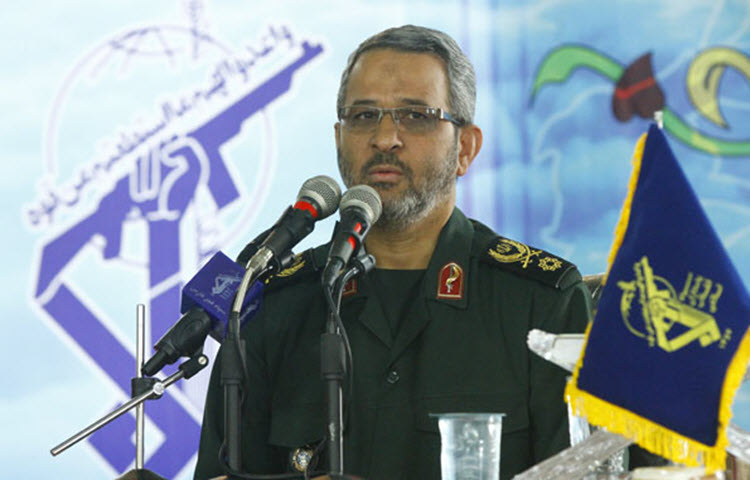 Brigadier General Gholam Hossein Gheibparvar has just been appointed by Iranian Supreme Leader Ali Khamenei as the new commander of Basij. The Basij force operates under the Revolutionary Guards (IRGC) and is a volunteer militia. Its main task is to deal with quashing domestic dissent.

Mohammad Reza Naghdi, a former commander of Basij, is now in charge of the IRGC’s unit for cultural and social affairs.

Gheibparvar, who is well known for the role he played in the Iran-Iraq war in the eighties in the 19th Fajr Division, was born in Shiraz.

He led the IRGC Fajr Corps in Fars Province for over a decade and was responsible for the Training & Education Department of the IRGC Ground Forces.

Following this role, he was commander of the 25th Karbala Division in Mazandaran Province.

After the 2009 uprisings across the country, Gheibparvar took on a strong stance towards the Iranian regime and had no tolerance for dissent.

He said: “The ‘seditioners’ in 2009 waged war against the martyrs, [Khomeini], the leader and all values of the revolution, and we the children of the revolution must recall their crimes each year and not allow the sedition be forgotten. In 2009 the ‘seditioners’ provided the country’s intelligence to the enemy, endangered national interests, led the country to the cliff and betrayed us.”

Gheibparvar is an advocate for cyberwarfare and wants the Basij to be ready for any kind of battle at any time. He said that Khomeini’s wish for there to be Basij fighters in all Islamic countries is finally happening.

The Basij force enforces the Islamic public conduct code, but their actions have raised some major concerns. For example, Ansar-e-Hezbollah (a group affiliated to the Basij force) handed out leaflets urging people to enforce the ban that prevents women from entering stadiums. The leaflets also warned about a “bloody uprising” and the group emphasised that it will carry out patrols on motorcycles in an effort to enforce what they describe as Islamic norms, and to “promote virtue and prevent vice”.

In a widespread effort to prevent the Iranian people from acting in ways they believe deviate from morality and culture, the Basij forces have been seen destroying satellite dishes. The “Gasht-e Ershad” is a guidance patrol supported by Basij. It takes pleasure in reprimanding people and making arrests or fining citizens. It is a big enforcer of the hijab.

Basij forces have been present in Syria and it has recently been reported that around 50 of its members have been killed there.