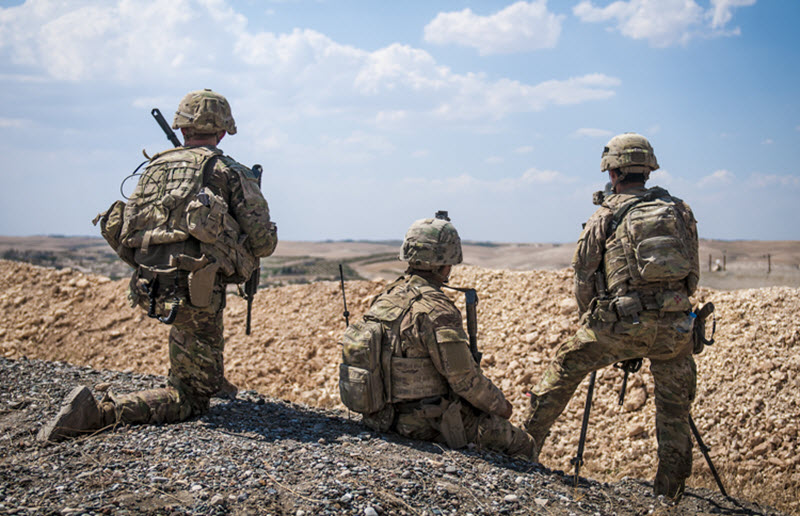 According to the new Lead Inspector General report from the US Department of Defense, the Iranian threat in Syria is increasing, and may also present a threat to the US in Iraq.

This report, entitled Operation Inherent Resolve, was released on Tuesday. It analyzes the US role fighting Islamic State in Syria and Iraq. It is a quarterly report, covering operations from July through September of this year. Iran is a growing threat to the US, according to the report, that examines how Washington is changing its posture in Syria as the mission changes.

US officials have been stating for the last several months that American troops would remain in Syria as long as Iranian troops were also present in the country. Now, the US is wants to “leverage” its influence in Syria to remove Iran — a major mission change.

The report focuses on the US base at Tanf, located in southern Syria near where the Jordanian and Iraqi borders meet, and notes that “while Iranian-backed miliitas may present a threat to the US and Coalition forces in Syria, neither Iran nor Iranian-backed militias had hindered counter-ISIS operations.” The garrison at Tanf restricts the movement of the Iranians.

The Defense Department has said, “These policy goals include removing Iran and Iranian proxies from the country, influencing the outcome of the Syrian civil war now in its 8th year and stabilizing areas of northeast Syria liberated from ISIS.”

The Meir Amit Intelligence and Terrorism Information Center reports that with Hezbollah’s help, Iran has started building another military base to serve pro-Iran militias in southwestern Syria, according to the Syrian opposition website al-Souria Net. Allegedly, Iran-affiliated terrorists destroyed roughly 650 homes and multiple villages in the Lajat region, to make room for the facility.

The US is also facing an increasing Iranian threat in Iraq. Now that ISIS has “lost all territory in Iraq,” according to the Defense Department, the presence of Iranian-backed forces is a concern for US forces still in Iraq.

The Iran-backed Popular Mobilization Forces of Shi’ite militias continue to act independently of the Iraqi army, and this “increases Iran’s influence in Iraq.”

Iran stands accused of not only providing significant direct support to armed groups, but also sending “missiles and rockets that are transported through border crossing points.” Iran also provides “Iranian military hardware such as drone surveillance operations.” Iranian-backed militias are said to engage in “running illegal checkpoints, smuggling, drug and oil trafficking, bribery, and extortion.” They have been accused of preventing Christians who had fled ISIS from returning to homes in Nineveh. “If left unchecked, Iranian-sponsored harassment of US forces could increase and Iranian influence operations could increase as they vie for influence in the new Iraqi government.”

The US is committed to countering “malign Iranian influence” according to the report, but without a policy from Washington directing it how to do this, the report seems to leave a large question mark over what comes next.

A disturbing report The Wall Street Journal said that Hezbollah has recruited close to 2,000 fighters — mostly former Syrian rebels who lost US financing last year. They are being paid to switch sides, and integrate into a growing, Iranian-led force in southern Syria. This allows Iran to enhance its presence close to Israel’s border. As well, IRGC-affiliated organizations are spreading Iran’s radical ideology across Syria.,