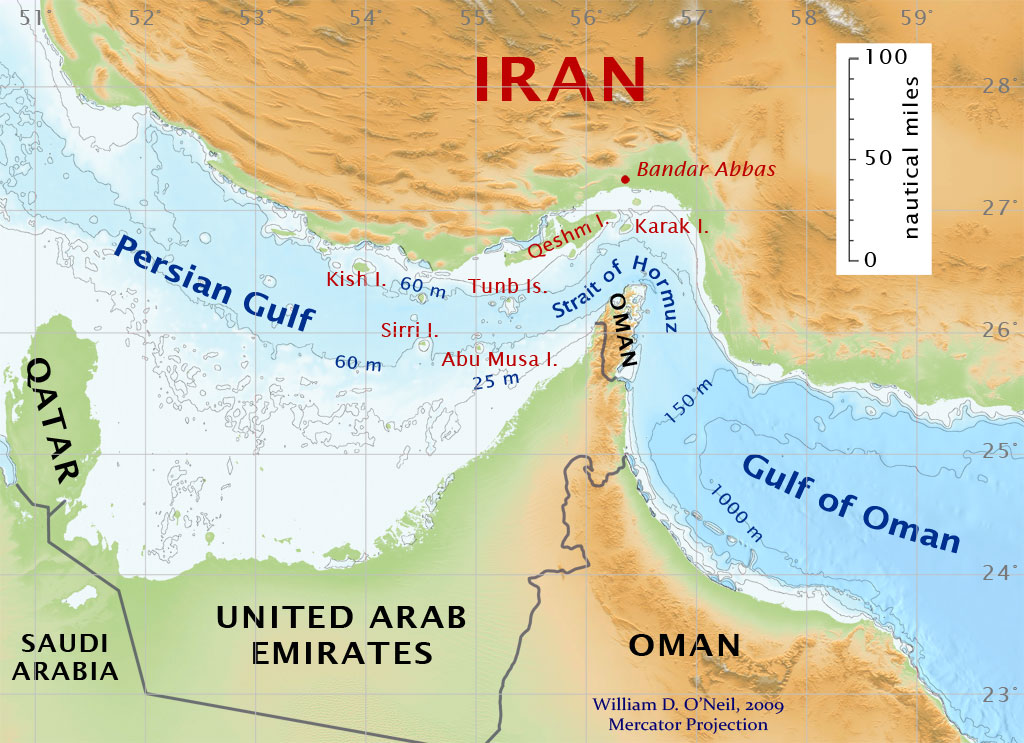 by Azita Carlson
Earlier this week, US President Trump threatened Iran with consequences “the likes of which few throughout history have suffered before,” in an ALL CAPS tweet. The potential for an escalation with Tehran is at an all-time high.

The unilateral withdrawal from the Joint Comprehensive Plan of Action or JCPOA, also called the Iran nuclear deal, by the U.S. will end Obama-era sanctions relief for the Islamic Republic. The United States is prepared to punish any foreign central bank willing to fund purchases of Persian crude, Iran’s 2 million barrels per day (b/d) of oil exports and its associated $50 billion in annual revenue are at risk.

Now, Tehran is threatening to blockade the Strait of Hormuz, a 21-mile-wide strategic choke point in the Arab Gulf, to stop the flow of seaborne oil exports from the Middle East.

Although conflict may prove disastrous to the Islamic Republic, the consequences will not be one-sided. A significant loss of life, and the closure of the waterway would send the global economy into chaos.

If Iran chooses to cordon off the strategic Strait of Hormuz, a recent oil industry analysis shows that nearly 20 million barrels per day (bpd) of crude oil – roughly 40% of global seaborne oil exports – would stop flowing from the Arab Gulf.

The Iranian Revolutionary Guard Corps (IRGC) has many options to employ a blockade. It is likely they will include using naval mines, scuttling large ships at shallow points in the waterway, and deploying land, sea, and air-launched anti-ship ballistic cruise missiles like the Nasr-1.

Iran’s torpedo boats may also attack. Any closure of the Strait would effectively cause global shipping insurers to refuse to protect ships risking the trip.

Would Iran also target oil fields in Saudi Arabia, UAE, Kuwait, and other Gulf states? It would mean other producers, including Russia, would have to stand by and fill any deficit in the oil markets.

Trump has deliberately padded his administration with Iran hawks, such as Secretary of State Mike Pompeo and National Security Advisor John Bolton. The move toward escalation is stronger than ever before. Still, the U.S. must also commit to protecting Israel and Saudi Arabia should they find themselves targets of Iran’s missiles.

Iran has aggressive global ambitions, but it is hoped that Tehran’s continued pressure from the US and her allies, will bring about a halt to its nuclear weapons development, its support for terrorism in the region, and its activities in Iraq, Lebanon, Syria, and Yemen.