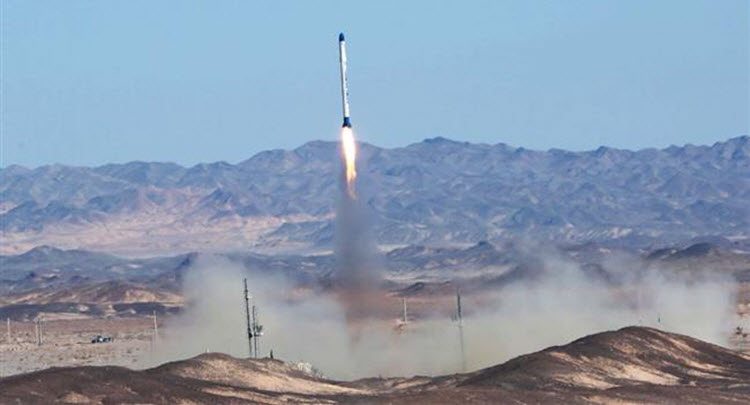 According to an announcement by Iranian military leaders Iran is preparing to launch two new domestic satellites into space.

This is a cause for U.S. National Security concern, who worry that the move may be a cover for the test firing of advanced intercontinental ballistic missile technology.

This news comes as the Trump administration continues its review of the Iran nuclear agreement, and according to U.S. officials, will result in a full-scale plan to “meet the challenges Iran poses with clarity and conviction.”

Launching satellites into space is similar to launching intercontinental ballistic missiles, and these could potentially reach U.S. soil.

Iran is in the midst of an effort to reorganize and boost its military so it can serve as an offensive fighting force. Along with the recent missile launch, this has also drawn concern among U.S. national security insiders.

Mahmoud Vaezi, Iranian Communications and Information Technology Minister, was quoted by the country’s state-run press as saying on Monday, “Now, we have two ready-to-launch satellites; one of them is Amir Kabir sensing satellite and another one is Nahid telecommunication satellite and over 97 percent of preparation works have been carried out on them.”

According to Michael Rubin, a former Pentagon adviser and expert on rogue regimes, launches of this nature have only increased since the nuclear agreement relaxed international restrictions on Iran’s military behavior. “That Iran uses its satellite program as cover for ballistic missile development is no secret although, quite realistically, since John Kerry loosened restrictions on Iran’s ballistic missile program, they don’t need to hide quite so much,” Rubin said. “The key thing to recognize is that we’re no longer talking about just Iran’s capability.”

Rubin added that U.S. leaders should be paying close attention to the illicit Iranian-North Korean arms trade. “When it comes to nuclear technology, Iran and North Korea are like sorority sisters swapping clothes or an old married couple sharing a toothbrush. What happens in Tehran doesn’t stay in Tehran.”

Research fellow and Iranian regime expert at the Foundation for Defense of Democracies, Saeed Ghasseminejad, called on the Trump administration to impose new sanctions on Iran as a way to restrict its behavior.

A number of sanctions were lifted on Iran, which has enabled it to reap billions, and part of that money has gone to fund the Islamic Republic’s military buildup.

“The best way to stop Iran’s ballistic missile program is to impose sanctions on the industries involved in the program,” Ghasseminejad said. “This includes the petrochemical, mining and metallurgy, telecommunications, automotive, oil and gas, and electronics industries. The U.S. used the industry-based sanctions to curb Iran’s nuclear program and they were very effective.”