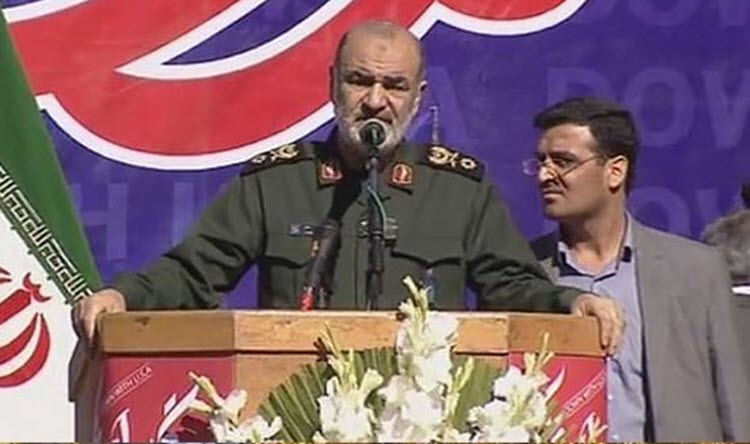 Dr. Majid Rafizadeh wrote an article for frontpagemag.com in which he discusses Iran’s game of scoring political points for injuring or killing Americans. He said Iran is “one of the few places in the world in which you are fully allowed to brag about murdering Americans and you can list it as a significant accomplishment on your resume”.

He points out that this is happening while the White House is telling the people to trust the Iranian regime.

Hossein Salami, the deputy commander in chief of the Islamic Revolutionary Guards Corps (IRGC), said earlier this week: “In 1983, the flames of Islamic revolution flared among Lebanese youth for the first time, and in a courageous act, a young Muslim buried 260 United States Marines under the rebels east of Mediterranean Sea.”

Dr. Rafizadeh points out that this was the “single deadliest terrorist attack on American citizens overseas”. The Iranian General treats the killer as a hero and makes the Americans who died out as devils who deserved what happened to them. The IRGC commander’s words serve only to encourage other ideological loyalists to also participate in terrorist attacks.

Hossein Salami is not the only military leader to talk like this about killing Americans. Mohsen Rafighdoost, former Minister of the IRGC, said that “the United States knows the explosives that mixed with ideology and sent up to 400 officers and Marines in the United States Marine Barracks to hell; both the TNT and the ideology behind it came from Iran”.

So Iran admits its participation in terrorist attacks against Americans and goes even further by boasting about it. The IRGC commander boasted that Iran’s military empire is expanding worldwide. He said it “today reaches to the North of the Red Sea in the Bab-el-Mandeb, is present in Yemen, and geographically extends to North Africa” and said that the country’s military presence in Syria, Lebanon, Iraq and Yemen is to “keep the danger away from our land”.

This IRGC deputy general only a few months ago promoted annihilating Israel. He said: “Today, more than ever, there is fertile ground — with the grace of God — for the annihilation, the wiping out and the collapse of the Zionist regime…In Lebanon alone, over 100,000 missiles are ready to be launched. If there is a will, if it serves [our] interests, and if the Zionist regime repeats its past mistakes due to its miscalculations, these missiles will pierce through space, and will strike at the heart of the Zionist regime. They will prepare the ground for its great collapse in the new era…tens of thousands of other high-precision, long-range missiles, with the necessary destructive capabilities, have been placed in various places throughout the Islamic world….They are just waiting for the command, so that when the trigger is pulled, the accursed black dot will be wiped off the geopolitical map of the world, once and for all.”

So it appears appeasement policies have just made the Iranian regime more bold, said Dr. Rafizadeh.

The deputy general went on to speak destructively about the US. He said: “The Islamic revolution… benefits from developments that the United States pays for….The United States has offered big achievements to the Islamic Republic through its conquests in Afghanistan and Iraq and paying heavy prices for them.”

Dr. Rafizadeh questions: “Should we continue with appeasement policies towards a country that its leaders publicly boast about murdering and bombing Americans?”