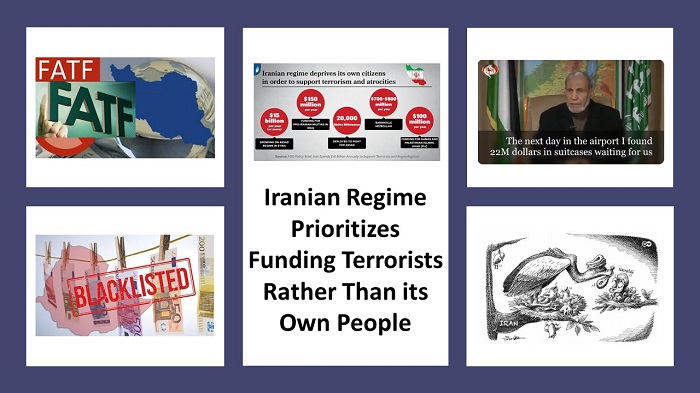 The protests that took place in Iran in December 2017 and November 2019, were due to the people suffering economically. Iranian people wanted to show that they wanted their grievances resolved. The National Council of Resistance of Iran (NCRI) and the  People’s Mojahedin Organization of Iran (PMOI / MEK Iran), analysts say that the regime intended to do nothing except quell the protests with bullets. But it said the reason the economy was doing so badly was because of sanctions imposed on it.

Iran is not a poor country and it has access to its own massive natural gas reserves as well as a large oil reserve. It is the envy of the world but this wealth isn’t filtering back to the people and they have to bear the brunt of out-of-control inflation and an increase in poverty.

The Iranian regime’s Supreme Leader, Ali Khamenei, and the Revolutionary Guards (IRGC) control Iran’s economy through 14 powerhouses and numerous front companies. Basically, the regime is corrupt and it uses the country’s wealth for funding terrorist groups, The Financial Action Task Force (FATF) has put the regime on its blacklist.

How the regime uses the country’s wealth

The IRGC Quds Force, when commanded by the now-deceased Qassem Soleimani, had been using the country’s cash to fund terrorist groups like Hezbollah.

2)
Why is this important?
The West may further appease Iran’s regime & the mullahs are demanding the U.S. lift sanctions in order to gain access to billions of dollars.

During the trial of Iranian diplomat-terrorist, Assadollah Assadi, evidence was provided that revealed the regime paid large sums of money to its “sleeper cells” so that they could plant a bomb at the opposition’s gathering near Paris. The sleeper cells are identified as including Amir Saadouni, Nasimeh Na’ami, and Mehrdad Arefani who were all arrested from June 28 to July 1, 2018, with Assadi.

Payments to the terrorists

These terrorists were technically qualified to receive welfare payments from the Belgium government, but Sadouni and Na’ami owned two vehicles and they may even have had two apartments. It was discovered that Na’ami had 120,000 euros in her bank account and 35,000 euros in cash at her home. Arefani had met with Assadi in different countries and had received large sums of money.

When Na’ami and Saadouni met Assadi for the last time they were given a bomb, a new SIM card, and at least 20,000 Euros, as well as written instructions explaining how to detonate the bomb. On June 26th it appears that the regime transferred 19,000 Euros to the couple’s bank account to cover the cost of a deposit for their 54,000-euro Mercedes.

Heshmatullah Felahatpisheh, who used to be the Chairman of the National Security and Foreign Policy Commission of the regime’s parliament, revealed that the regime had paid $30 billion to Syria.

In April 2020, Parviz Fattah, who is the head of the Bonyad Mostazafan financial foundation which is one of the 14 powerhouses which control Iran’s economy, acknowledged that Soleimani had asked him for cash to pay the Fatemiyoun salaries who are Afghani proxies fighting in the Syrian war.

The Lebanese Hezbollah chief Hassan Nasrallah said the following in 2016: “We are open about the fact that Hezbollah’s budget, its income, its expenses, everything it eats and drinks, its weapons and rockets, come from the Islamic Republic of Iran.”

The regime has been using the Iranian people’s wealth to support terrorism, and this won’t stop because terrorism is just a part of the religious fascism in Iran. Every cent that goes to the regime will be used to export terrorism overseas and to take part in human rights violations at home.

The people of #Iran inundated by #floods, destitution and various calamities, are crying out, “Let go of Syria and think about us instead.” But the regime’s meddling and crimes in Iraq, Syria, Yemen, Lebanon & Afghanistan have brought them no serious consequences. #FreeIran pic.twitter.com/cPJfW1BG3w

During the recent protests, the Iranian people have said:

The appeasement of Iran by the EU countries only promotes insecurity, death, and destruction everywhere. They should be able to see how dangerous the regime is following the arrest of the diplomat terrorist Assadi, whose role in the thwarted bomb attack on Iran’s main opposition, the National Council of Resistance of Iran’s (NCRI), and the People’s Mojahedin Organization of Iran (PMOI / MEK Iran), who were in attendance at a meeting near Paris was an example of exporting terrorism.

#TEHRAN, #Iran, June 25, 2018. Angry Protesters chant: "Let go of Syria, think about us" No Gaza, "No Lebanon, my life for Iran"https://t.co/d6yKtg4wbY #IranProtests pic.twitter.com/CVzyzAikZV