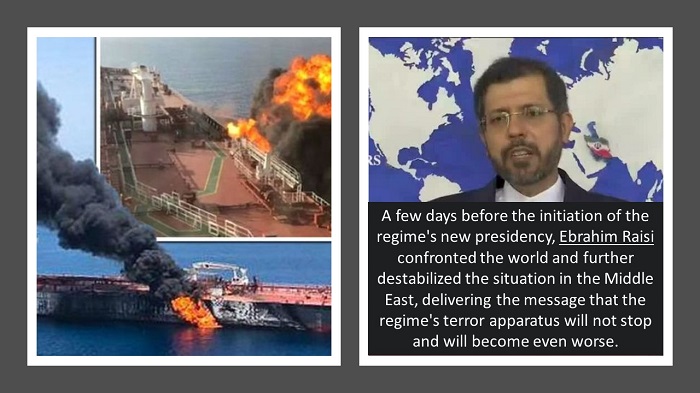 An oil cargo was assaulted off the coast of Oman, a week ago. Meanwhile, Iranian regime officials continue to deny the connection, despite the fact that increasing numbers of international voices agree that all available evidence points to Tehran.

The attack was a “clear violation of international law.”

The G7 foreign ministers released a joint statement on Friday, emphasizing that Iran’s government poses a threat to international peace and security and that the July 29 attack was a “clear violation of international law.”

The announcement came as US Central Command released an analysis determining that the tanker in question had been damaged by an explosives-laden drone with identifying features of Iranian manufacture.

“We call on Iran to cease all activities that are in violation of relevant United Nations Security Council resolutions, and we call on all parties to play a constructive role in fostering regional stability and peace,” the statement continued, without elaborating on the consequences for the Iranian regime’s failure to comply or specifying exactly what type of role is expected from which parties.

He went on to promise that rigorous diplomacy would continue, but this was received with predictable criticism, given the Mercer Street attack’s evident escalation.

The blast killed two members of the boat’s crew, one British and one Romanian, and created a six-foot diameter hole in the pilothouse.

The EU and the US, for instance, must make more strong gestures in response to the regime’s expanding terrorist operations. Since Ebrahim Raisi took over as the regime’s new president, these threats have intensified.

Furthermore, any accusation that western countries, particularly the EU, are fostering a conflict with Iran is contradicted by the fact that the EU and its member states remain publicly committed to the appeasement strategy notwithstanding the terrible July 29 incident. Borrell went so far as to send Enrique Mora, the European External Action Service’s deputy political director, to Raisi’s installation.

Mora went to Iran at a time when the regime’s conduct is worsening and Raisi’s election to the presidency is a prime example of the regime’s impunity.

1988 massacre were crimes against humanity

Raisi was a key figure in the massacre of political detainees in 1988.

Many observers consider the 1988 massacre to be one of the worst crimes against humanity of the late twentieth century.

Yet Raisi’s presidential inauguration is part of a long tradition of Iranian officials being rewarded for this and other crimes against humanity.

Raisi’s presidency raises further concerns about the significance of Western presence during his inauguration.

Raisi has been the subject of critical remarks from the international community, and he will very certainly continue to be, but these statements, like those on Mercer Street, appear to be unsupported by tangible action.

Despite politicians’ promises to take a harsher stance against the regime’s belligerence, Western powers continue to ignore the regime’s crimes.