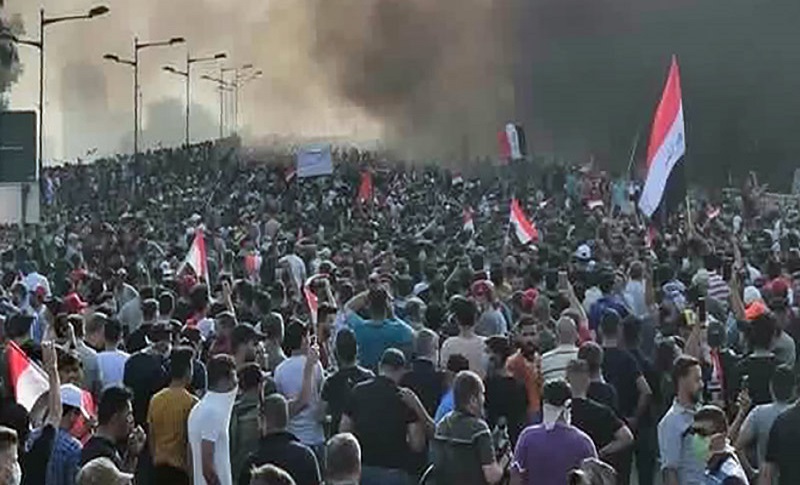 Angry protesters in Najaf, southern Iraq, set fire to the offices of the Iran-backed Asaeb al-Haq militia group, which is led by Qeis al-Khazali, and burnt them to the ground on Wednesday.

While in Amarah, Iraqi demonstrators set fire to all offices and bases of the militia, and in Najaf and Dhi Qar, they burned two sites associated with the group run by Amar al-Hakim, an Iraqi official with known ties to Tehran.

At the same time, young demonstrators set fire to the Dawa Party headquarters in Dhi Qar Province, which chaired by former Iraqi prime minister Nouri al-Maliki, who is linked to the Iran Regime.

The demonstrators told Al Arabiya TV that they condemn the Regime’s meddling in their country and the crackdown against Iraqis by Iran-backed militias. Iran concocted the conspiracy theory that this was a US plot.

Al Arabiya TV also said that Haj Hamed, the deputy chief of the Iranian Revolutionary Guards’ (IRGC) Quds Force, established a war room in Baghdad to coordinate the crackdown of demonstrations across Iraq and ordered the dispatch of Iran-backed militia groups across Baghdad, including the Khorassani group.

On Saturday, the Associated Press reported that police snipers on rooftops were firing into a crowd of protesters in Baghdad, while Reuters TV personnel saw a man get shot in the neck. Sporadic gunfire continued throughout the evening.

The Iraqi Army personnel, who have been protecting the demonstrators on various occasions, have been attacked by Iran-backed militia members in black military uniforms.

Al-Jabouri said: “Due to the bloody crackdown against the demonstration and using snipers against the protesters, the Iraqi people are determined to expand their demonstration as much as possible, making this movement stronger and more widespread.”

Al-Sheikh Ali said: “The Iranian regime is murdering us… this is no longer a secret. The Friday prayer imam of Tehran specifically said, ‘The protesting Iraqi demonstrators are American operatives. Murder them!’. Those murdering the Iraqis are snipers mercenaries and the true enemies of the Iraqi nations who are targeting the demonstrators.”

Iraqi analysts, politicians, and activists believe that economic reform cannot happen unless Iran-backed militia groups are contained and Iran stops meddling in the country. Indeed, an Iranian paper linked with the Supreme leader has even suggested seizing the US embassy in Baghdad.