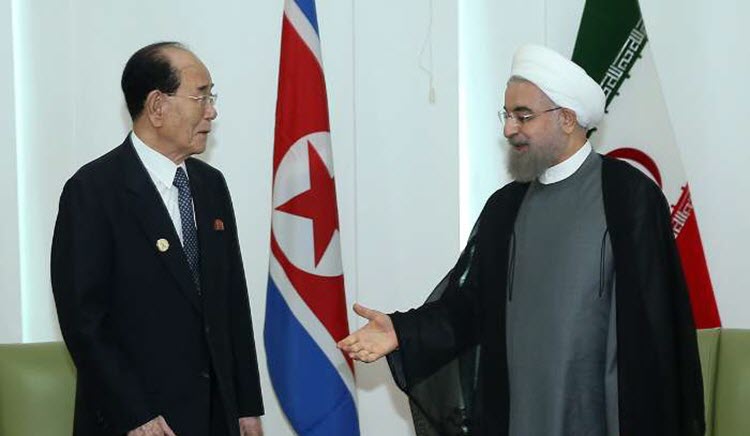 Syria and North Korea are a large concern for the Trump administration but Syria’s civil war has created a greater concern.  Millions of refugees have fled, and continue to flee the war in Syria. Diseases like polio, once thought to be extinct, have been revived, and the country has become a haven for Islamic State terrorists, as well.

And yet, according to Jennifer Rubin in her article for the Washington Post, “these should be lesser concerns in the bigger scheme.”

Historian and former Israeli ambassador to the United States, Michael Oren recently wrote, “The framework agreements with North Korea and Syria, concluded respectively in 1994 and 2013, were similar in many ways. Both recognized that the regimes already possessed weapons of mass destruction or at least the means to produce them. Both assumed that the regimes would surrender their arsenals under an international treaty and open their facilities to inspectors. And both believed that these repressive states, if properly engaged, could be brought into the community of nations.”

Oren writes, “All those assumptions were wrong.”

The strikes on Syria, and the ships sent to patrol off North Korea, were praised by Oren, as they uphold the framework behind anti-WMD agreements. However, Oren says that the danger from these states is lesser than that posed by Iran, without whom Syrian President Bashar al-Assad could not have remained in power.

He points out, “Iran could follow the Syrian and North Korean examples and cheat. Or, while enjoying hundreds of billions of dollars in sanctions relief, it can adhere to the agreement and deactivate parts of its nuclear facilities rather than dismantle them. It can develop new technologies for producing atomic bombs while testing intercontinental ballistic missiles. It can continue massacring Syrians, Iraqis and Yemenis, and bankrolling Hamas and Hezbollah. The [Joint Comprehensive Plan of Action] enables Iran to do all that merely by complying.”

Similar to the suggestions of both Republican and Democratic lawmakers and outside experts, Oren recommends that, “The remaining American sanctions on Iran must stay staunchly in place and Congress must pass further punitive legislation. Above all, a strong link must be established between the JCPOA and Iran’s support for terror, its pledges to annihilate Israel and overthrow pro-American Arab governments, and its complicity in massacres.”

The mammoth Boeing deal with Iran illustrates the glaring shortcomings of the JCPOA. Bloomberg reports: “Boeing Co. landed its second jetliner sale to an Iranian airline since the 1970s, a $3 billion deal that sets up a test of the planemaker’s ties with President Donald Trump. The pact with Iran Aseman Airlines to purchase 30 of Boeing’s 737 Max planes adds to a separate $16.6 billion agreement with Iran Air, which the Chicago-based manufacturer is still finalizing. If completed, the transactions would be the first U.S. aircraft exports to Iran since the Shah era.”

Iran wants to upgrade its fleet due to safety concerns, but it isn’t clear whether the Middle Eastern country will be able to absorb the hundreds of aircraft it is ordering from Boeing and Airbus.

Aerospace consultant Richard Aboulafia said, “If you add it all up, Iran needs nothing like the number of jetliners they are committing to. It’s not clear they can afford them either.”

The House has passed a bill trying to block the sale, however sources in the Senate concede that the deal is legal under current law.

Senator Ben Cardin, a Democrat from Maryland who is the ranking member of the Foreign Relations Committee, said that there is little Congress can do to block the sale as long as it meets the terms set out in the nuclear deal. Senator John McCain, a Republican from Arizona agreed.

Rubin says in her article for the Post, “The incoherence here is stunning. On one hand, we are properly worried over Syria and North Korea. On the other hand, our current policy toward Iran, a much greater threat, is such that we are helping to rebuild and enrich a country that is supporting Assad, is exporting terrorism, is fomenting regional chaos and — even without cheating — can eventually obtain nuclear weapons. We are concerned about North Korea’s puny and inept ballistic missile program but have done nothing since pinprick sanctions to respond to Iran’s illegal missile tests. We have lots of challenges to address, to be sure, but we shouldn’t take our eyes off of the worst and most dangerous rogue state.”