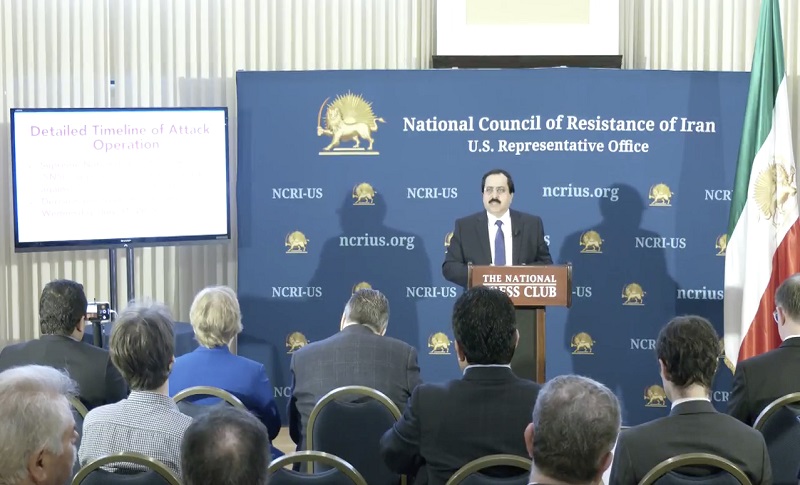 The NCRI U.S. Representative Office held a press conference on Monday, September 30, at the National Press Club in Washington, DC, exposing exclusive and top secret information sourced from inside the Iranian regime and obtained by the People’s Mojahedin Organization of Iran (PMOI/MEK).

Based on the latest intelligence report received from inside Iran and within the government by the National Council of Resistance of Iran (NCRI), the Iranian regime was involved in the September 14 missile and drone attacks targeting Saudi oil facilities.

The presented information details that a Squad missile team entered the Omidiyeh base in southwest Iran on September 22 and the missiles were produced by the Thamen ol-Aemeh Cruise missile group.

The information indicates that the attack involved the highest levels of the Revolutionary Guards (IRGC) who directed it at every step. It was under the direct order of Iranian regime supreme leader Ali Khamenei to the tactical command headquarters for the operation deployed from Tehran to Khuzestan province (southwest Iran) one week prior to the attack.

“The simultaneous attack on Saudi oil facilities was a blatant act of war by the Iranian regime. The regime is desperate to export its crises beyond its borders. They are counting on the inaction of the international community, so they can manipulate and gain concessions from the west. The only way to eliminate the threat of the regime is to change the regime by the people and their resistance,” said Alireza Jafarzadeh, Deputy Director of NCRI U.S. Representative Office.

“The Supreme National Security Council (SNSC) of the Iranian regime approved a plan for an attack against Saudi Arabian oil facilities in a session on Wednesday, July 31, 2019, presided over by Iranian regime president Hassan Rouhani. Foreign minister Mohammad Javad Zarif is also a regular member of the SNSC and attends its sessions.”

According to the report, several IRGC commanders were present in the meeting, including:

• IRGC Major General Gholam-Ali Rashid, commander of the central headquarters of the Khatam-al Anbiya (highest operational military headquarters in Iran, in charge of operational coordination between all of the regime’s armed forces, including the IRGC and the regular armed forces)
• IRGC chief Major General Hossein Salami
• IRGC Quds Force chief Qassem Soleimani
• IRGC Air Force chief Amir-Ali Hajizadeh
Rashid and Hajizadeh are not regular members of the SNSC and participated in this session especially for the purpose at hand.

PressConf. @A_Jafarzadeh: The regime’s SNSC approved a plan 4an attack against #SaudiArabian oil facilities in a session on July31-2019 in the presence of #Rouhani& #Zarif.
The #IRGC commanders who’ve been present in the meeting were:#IranRegimeChange #FreeIran #MEK pic.twitter.com/KAO8O0V2aQ

Jafarzadeh suggested concrete steps to address the malign activities of the Iranian regime by implementing UN Security Council resolutions on banning enrichment; removing Iran’s proxies from Yemen, Syria and Iraq; looking into the human rights dossier of the regime; referring to the dossier of the 1988 massacre of political prisoners to international tribunals and the recognition of the right of the Iranian people to resist against the religious dictatorship.

“The NCRI says its intelligence indicates that the attack involved the highest levels of the Iranian regime. It goes on to name the type of missiles used and claims that it was produced by the military facility in Parchin, Tehran,” Fox News reported.

“The simultaneous missile and drone attack on Saudi Arabia’s oil facilities on September 14, 2019, emanated from inside Iran and was a blatant act of war that Khamenei, Rouhani, Zarif, and other regime heads were responsible for in deciding, approving, and implementing.”

Fox News also referred to the Iranian regime’s terrorist activities in Europe. “The NCRI has long been a thorn in the side of the regime, and its members have been targeted by the regime in attempted terror attacks in Europe. The NCRI has responded by calling for Europe to shut down Tehran’s embassies on the continent.”

The UK Express covered the conference as well. “The Iran-aligned rebel Houthi movement in Yemen previously claimed responsibility for the launch, which sent the price of oil soaring. But a report from National Council of Resistance of Iran released today claims the attack was directly ordered by none other than Iran’s Supreme Leader Ali Khamenei,” the Express reported on its website.