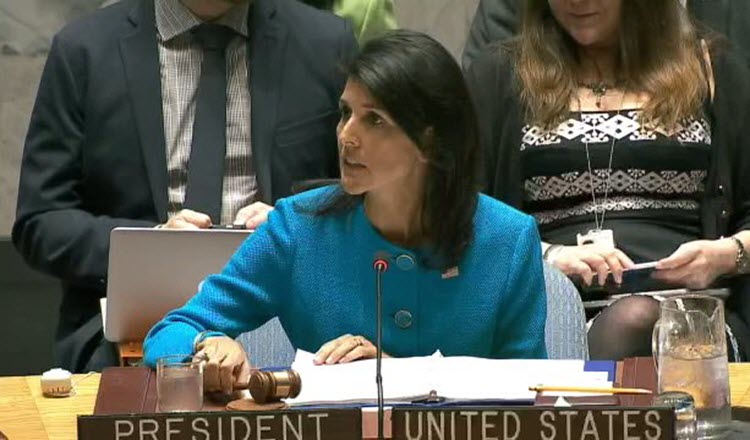 The US representative to the United Nations – Ambassador Nikki Haley – was the chair at the latest UN Security Council debate regarding the situation in the Middle East. At these meetings, Israel is always discussed, and not often in a positive light.

However, Haley wanted this latest debate to be different. She acknowledged that it was essential that an Israeli-Palestinian solution was negotiated, but said that the debate has a tendency to get nowhere.

She said she wanted to focus on Iran as being at the centre of problems in the Middle East. She said Iran is the “chief culprit” of trouble in the region along with its proxy partner – Hezbollah.

Haley pointed out that Iran and Hezbollah have been spreading terrorism across many countries in the Middle East including Yemen, Bahrain, Syria and Lebanon.

“Hizballah is a terrorist group spreading its influence across Middle East with the backing of a state sponsor. Iran is using Hizballah to advance its regional aspirations. They are working together to expand extremist ideologies in the Middle East. That is a threat that should be dominating our discussion at this Security Council.”

She reiterated that the United States is not going to ignore the threat that is posed by Iran in the same way that the previous administration did.

The Secretary of State Rex Tillerson confirmed last week that Iran had complied to the terms of the nuclear deal, but this was nothing to brag about because the Obama administration has drawn up a very weak deal that gave many concessions to Iran.

One such concession was regarding missile tests – although there is a Security Council resolution that endorses the nuclear deal, former Secretary of State John Kerry made a late concession to keep it out of the literal text of the deal.

At the end of last week, the National Council of Resistance of Iran (NCRI) held a news conference and revealed that the Iranian regime is continuing to work on nuclear bomb technologies that had started before the nuclear deal was signed. A military base at Parchin is where the work is being carried out. Although UN inspectors have access to this site, it is very limited and restricted (another concession that Kerry gave in to).

The nuclear deal was focused only on the production of fissile material, but the Iranian experts are already on top of this. It did not address detonation and high explosive delivery, so Iran is concentrating its efforts on this. Thus, it is no big deal for Iran to have to wait until the expiration of the nuclear deal because the other nuclear aspects need work.