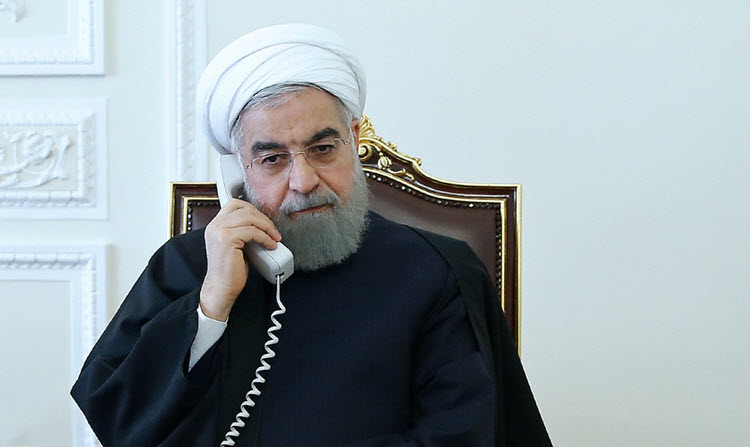 Iranian state media has reported that President Hassan Rouhani contacted Syrian President Bashar al Assad via telephone to reiterate his support for the Assad regime. He said that the chemical attack recently carried out in Syria was orchestrated by the opposition.

He reportedly said: “The use of chemical weapons (…) was aimed to divert the general public’s attention from the truth. We must not permit terrorists use such weaponry, then accuse others and provide pretexts for measures in violation of international regulations.”

The Iranian regime has spent decades blaming the Iranian opposition on repressing and killing the people of Iran. President Rouhani also boasts that he has been able to deceive the international community regarding Iran’s nuclear program.

Speaking about Rouhani’s faction, the Minister of Industries and Mines Mohammad Reza Ne’matzadeh commented as follows: “Rouhani once said in a cabinet meeting how he asked [Khamenei] what is in our interest. Should I participate or not? [Khamenei] emphasized you must participate as a candidate. I am certain that if [Khamenei] said, for example, don’t participate, it is not in our interest, he would have accepted it immediately. He makes no decision on major issues without [Khamenei’s] blessing.”

Ne’matzadeh emphasised that Rouhani abided by Khamenei’s instructions during the nuclear deal negotiations and never deviated from what he was ordered to do or say. He points out that Rouhani has been a student of Khamenei since 1963 and has the habit of seeking approval from Khamenei in all matters.

Mahmoud Sadeghi, an MP, pointed out last month that Rouhani sought Khamenei’s approval before the Presidential elections. Khamenei told Rouhani that it would be possible for the two to work together and made it clear that he thinks highly of Rouhani.

By the very fact that Rouhani works so closely, or you could argue that he works on the orders of Khamenei, shows that all factions of the Iranian regime are working in tune with the same ideals. Rouhani’s phone call to the Syrian dictator and his declaration of support for his regime indicates that there is no moderation within the leadership of Iran. The domestic abuse extends abroad and the regime has no qualms about plundering the people’s money on terrorism and fundamentalism.

The battle in Syria is of great importance to Iran right now because its whole future is dependent upon having success there. Khamenei said several months ago that if the Iranian regime loses the battle in Syria, it would have no choice but to fight in Tehran, Fars, Khorasan and Isfahan.