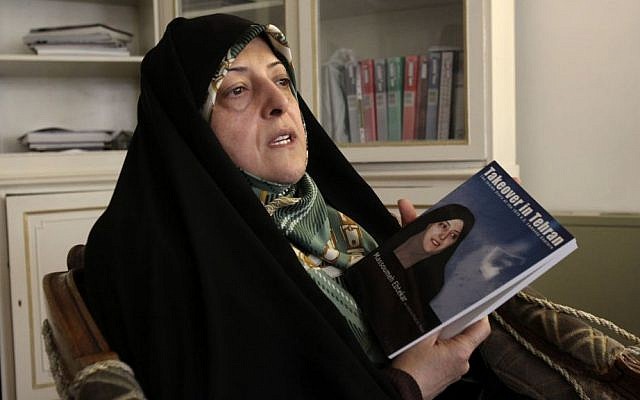 by Armin Baldwin
Masoumeh Ebtekar, the Islamic Republic’s Vice President of Iran for Women and Family Affairs, was recently invited to Sweden, a move condemned by Iranian dissidents. Ebtekar, 57, was actively involved in the storming of the US embassy in Tehran 40 years ago.

According to a statement signed by more than a hundred exp

at Iranians from across the globe, she was “an organizer and participant” in the hostage crisis. “Mrs. Ebtekar has never expressed regret for that act,” the statement said, “And yet the Swedish government, through Foreign Minister Margot Wallstrom, has invited her to Sweden.”

In November 1979, soon after the Islamic Revolution, Iranian students took American diplomats and citizens hostage, and kept them captive for 444 days, the longest hostage crisis in modern history.

Mrs. Ebtekar served as the Iranian hostage-takers’ spokesperson to the international media. She also wrote a book about her role in the event. Hosting Ebtekar is akin to supporting the Iranian storming of the US Embassy, according to Iranian dissidents, including Times of Israel blogger Neda Amin.

The dissidents wrote, “We Iranians living in democratic western countries are greatly disturbed by the total lack of human dignity in this invitation. We believe the Swedish Ministry of Foreign Affairs is supporting an illegal act, where an embassy was taken over by force and diplomats taken hostage, by inviting one of the masterminds behind that horrific act.” The statement continues, “There are many distinguished Iranian women who are true leaders and are respected globally. They are human rights champions and proponents of gender equality. Sweden could have invited one of them instead.”

On Tuesday, at a memorial event for Israeli diplomats who were killed while serving their country abroad, Israeli Prime Minister Benjamin Netanyahu described the Iranian storming of the US embassy as the beginning of a new age of terrorism. “If I had to mark the day when terrorism began to break out onto the modern world, I would say it was in a dramatic event in Tehran 39 years ago: the takeover of the US embassy in Tehran and the capture of dozens of diplomats and civilians as hostages,” he said. “Terror, and more terrorism, a terror that crosses borders.”

Ebtekar has previously been hosted by the European Union and individual European governments.