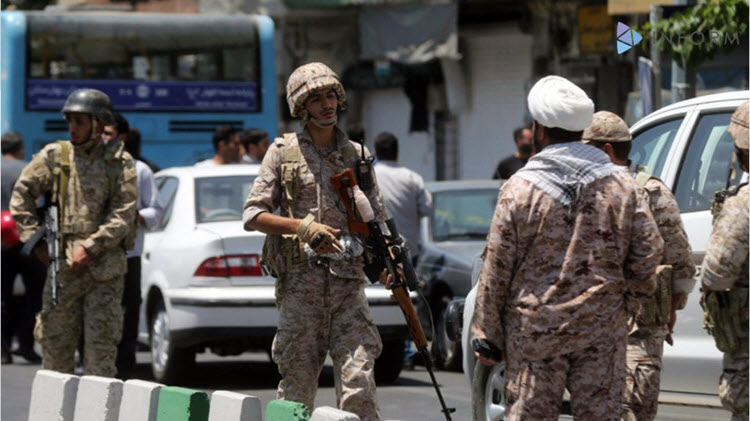 Wednesday’s twin attacks were heinous crimes that shed the blood of defenseless civilians at Iran’s parliament and the tomb of the Islamic Republic’s founder. They are said to have been carried out by the Islamic State.

These attacks were condemned by heads of state and political figures across the world. However, in a reference to Iran’s destabilizing role in the region, President Trump reminded that “states that sponsor terrorism risk falling victim to the evil they promote.” By this statement, he points our the difference between an attack taking place in Tehran and recent terrorist attacks in London and Manchester.

In an article by Iranian human rights activist, Amir Basiri, for the Washington Examiner he writes, “The Islamic State clearly owes its rise to Tehran. The violence caused by Iran’s Revolutionary Guards and its affiliates in Iraq and Syria created the perfect breeding ground for the emergence of the Islamic State and allowed it to occupy large swathes of land in both countries. Reciprocally, the Islamic State returned the favor, causing rampage that provided Iran with the perfect excuse to increase its meddling in neighboring countries. Under the pretext of fighting the Islamic State, Tehran founded and legalized the Popular Mobilization Forces, an umbrella for extremist Shiite groups backed by Iran. The Islamic State also became Iran’s excuse to openly intervene in the Syrian conflict and shore up the Assad regime against opposition forces.”

According to Basiri, the relationship between the Iranian regime and the Islamic State prevents them from making any moves that threaten each other’s existence. He says that Iran gives safe haven to Sunni extremist groups and their leaders.There are reports, as well, of Iran’s forces de-conflicting and colluding with Islamic State forces in Syria.

The twin attacks occurred while the Iranian regime is dealing with several setbacks. Protests are increasing across the country and the Iranian people have become more bold in expressing their desire for freedom and regime change. Tehran is also facing isolation because of its involvement in the affairs of the region.

Iranian opposition leader Maryam Rajavi said in a statement that condemned the Islamic State attacks, “ISIS’s conduct clearly benefits the Iranian regime’s Supreme Leader Khamenei, who wholeheartedly welcomes it as an opportunity to overcome his regime’s regional and international impasse and isolation. The founder and the number one state sponsor of terror is thus trying to switch the place of murderer and the victim and portray the central banker of terrorism as a victim.”

The Supreme Leader of the Iranian regime, Ali Khamenei, seized the opportunity to legitimize Tehran’s involvement in Syria and Iraq, following the attacks. Speaking at a student gathering, he said, “These events show that if the Islamic Republic wouldn’t make a stand in the center of the sedition [reference to Syria and Iraq], we would have many more trouble inside Iran.” He also gave a “fire at will” order to his forces to “maintain security,” as an attempt to crack down on dissents and protests.

Terrorism breeds terrorism, and this is a reminder that Iran is not part of the solution in fighting the Islamic State or other extremist groups. Islamic fundamentalism can only be eradicated if it is fought in its entirety. The international community must acknowledge this, and take action or terrorist attacks will continue.