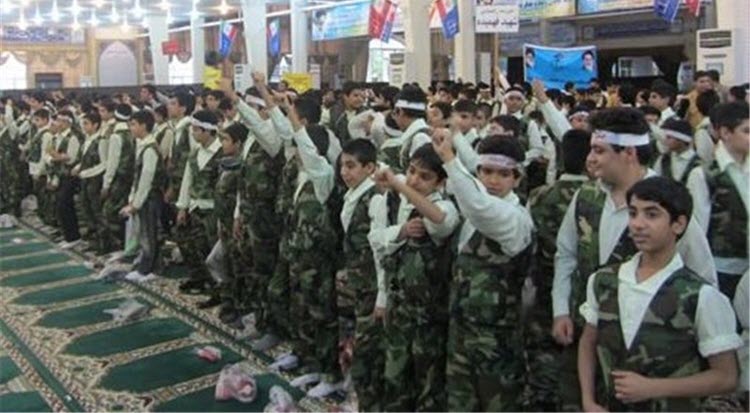 Tony Duheaume, for Al Arabiya English, wrote an article about the Basij Mostazafan. He explained that in Iran, ever since the beginning of the revolution which saw the overthrow of the Shah of Iran Mohammad Reza Pahlavi, the country has experienced martyrdom and death via the clerical regime.

He said: “In the early days of the newly founded Republic, with Iran’s Supreme Leader, Ayatollah Ruhollah Khomeini, having decided to purge both the ranks of the Shah’s old military, and many of the various groups that had sided with him to bring the Shah down – but at this point had turned on him, having realized they had just replaced one autocratic ruler with another, and were arranging street demonstrations to oppose his rule, the Supreme Leader found the need to restore order in the land, through the formation of the Iranian Revolutionary Guard Corps – an elite military unit which he created in May 1979, and from its inception had kept directly under his control.”

However, the IRGC, despite being very loyal to the Supreme Leader, tended to ignore orders regarding internal conflict. This was especially true when it came to cracking down on protesters in the street, or demonstrators at universities or other public places.

In such circumstances, the Basij militia stepped in to help the Iranian leadership. Khomeini officially named this new militia the Basij Mostazafan (“mobilisation of the oppressed”). With thorough training from the IRGC, they became heavily indoctrinated with fanatical Shia ideology. By the end of their training they were prepared to give up their lives for their state and leadership. Duheaume said they act as the “regime’s dogs” and described them as “nothing more than a suicidal band of zealots, who have never had any qualms about going against their own fellow countrymen during any form of public protest”.

They will drive into anti-regime protests and will beat protesters with clubs and chains. They would not hesitate to open fire during a peaceful demonstration. The IRGC prefer to stay a popular force amongst the people and do not do this. In 1994, the Guards refused to fire on protesters in Qazvin where people were protesting against the ghastly living conditions. They refused to leave their barracks because they did not want their name associated with firing on unarmed protesters. So the Basij stepped in. They killed around 40 people and left more than 400 injured.

Duheaume drew comparisons between the Basij and Hitler’s Storm Battalions, or Brown Shirts. Just like the Brown Shirts, the Basij members were brainwashed and indoctrinated with the ideology of radical Shiite Islam. Another comparison with the Brown Shirts is that the Basij will terrorise political opponents. He warned: “The need for a fighting force like the Basij, which was only ever given very basic firearms training, and could be ready for action within weeks, first became apparent to Khomeini at the end of the revolution, when he needed a militia that would be totally loyal to him to back up the IRGC.”