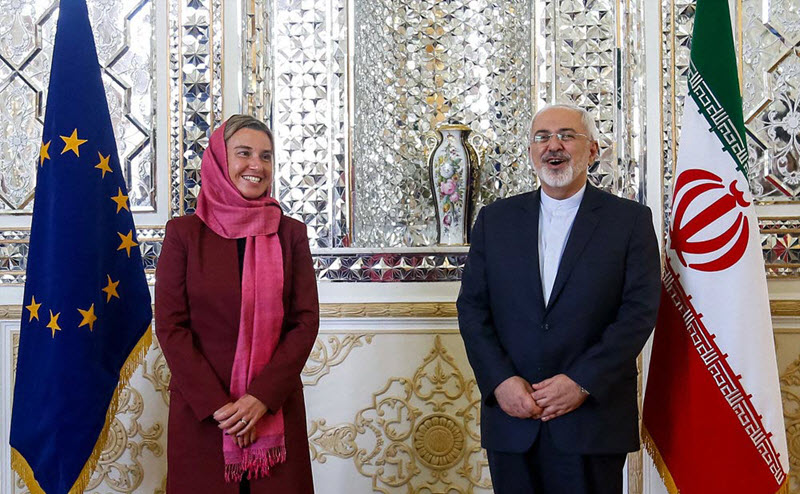 Europe’s support in countering the recently reimposed U.S. sanctions is vital to Iran, but at the same time, the country wants to eliminate its opposition in Europe.

Iran relies on European support to prop up the nuclear deal that was been abandoned by the United States. But in the meantime, representatives of Denmark and France briefed EU members on Iran’s role in foiled terrorist attacks against opposition groups in their countries.

“The EU held a renewed discussion about common steps against Iran,” Danish Foreign Minister Anders Samuelsen told reporters after the November 20 meeting. He did not elaborate on what precise steps were discussed.

While the EU has been in favor of the survival of the Iran nuclear deal, a number of European countries have become increasingly frustrated with Tehran’s behavior, especially its involvement in foiled terror plots on the continent.

For instance, France recently imposed sanctions on Iran’s intelligence service and two Iranians because of a terror plot aimed at an annual anti-regime rally organized by an exiled Iranian opposition group, the National Council of Resistance of Iran (NCRI). An Iranian diplomat based in Vienna is alleged to have commissioned a Belgian-Iranian couple to carry out an attack on a rally held outside of Paris, including providing them with an explosive device.

Iran’s intelligence service has also been accused by Denmark of plotting to carry out an assassination plot on its soil. The plot targeted activists who Tehran believes were involved in the September 22nd attack on a military parade in the Iranian city of Ahvaz, in which twenty-five people, including Iranian soldiers, were killed. The activist group has denied any ties to the Ahvaz attack.

Although Albania is not a member of the EU, Tehran has been accused of targeting anti-regime activists based there. Two Iranian operatives are believed to have been arrested earlier this year on terror charges.

The foiled attacks in France and Denmark have may EU member states more open to imposing sanctions on Tehran, and the NCRI is strongly in favor of these potential EU sanctions, as well as the blacklisting of Iran’s Ministry of Intelligence and Security (MOIS) as a terrorist entity. A statement issued by the group said, “Several decades of the appeasement policy towards the religious dictatorship in Iran, and all the economic and political incentives that it has given the regime in these years, has only encouraged the regime to further export terrorism, carry out human rights abuses and attempt to obtain nuclear weapons.”

A joint statement has been signed by 150 MEPs in the European Parliament, who represent 27 EU member states. It demands that the bloc hold Tehran accountable for launching a “new wave of terrorism against the democratic opposition activists in Europe and in the United States.” the statement added, “The EU’s silence in the face of brutal human rights violations in Iran and lack of any response to the serious terror plots in Europe is unacceptable.” The statement highlights the disquiet within the EU towards Iran’s policies on the continent.

Gerard Deprez, a Belgian MEP and chairman of the Friends of a Free Iran committee said, “We have seen many terrorist plots by the mullahs’ regime against Iranian activists on European soil. This is totally unacceptable.We have called on the EU and the European member states to expel all Iranian intelligence agents from Europe.”

Following the EU’s meeting and the MEP’s joint letter, demands were aimed at EU foreign policy chief Federica Mogherini to advocate for the EU to take a tougher stance towards Iran, including dropping any plans to assist Tehran in circumventing US sanctions. In fact, many wonder why Iran would risk backlash at a time when it is relying on the EU to set up a so-called Special Purpose Vehicle (SPV) to circumvent US sanctions and prop up the JCPOA.

Iranian Foreign Minister Mohammad Javid Zarif told reporters, “The Europeans are facing a challenge in identifying a country to host the SPV.” He appeared impatient with the process, and continues to dismiss the dire consequences of US sanctions. “We will certainly survive. We will not only survive, we will thrive. We have tried to minimise the impact on the population but the ordinary people are going to suffer, the economy is going to suffer,” he said after a meeting with British Foreign Secretary Jeremy Hunt.

According to analysts, however, without the SPV, US sanctions, particularly those on Iranian oil exports, will prove debilitating to Tehran.

Micha’el Tanchum, a fellow at the Truman Research Institute for the Advancement of Peace wrote in an article in Foreign Policy magazine, “As long as Washington can prevent it from obtaining vital enhanced oil recovery technologies, Iran’s economy will become increasingly fragile.”