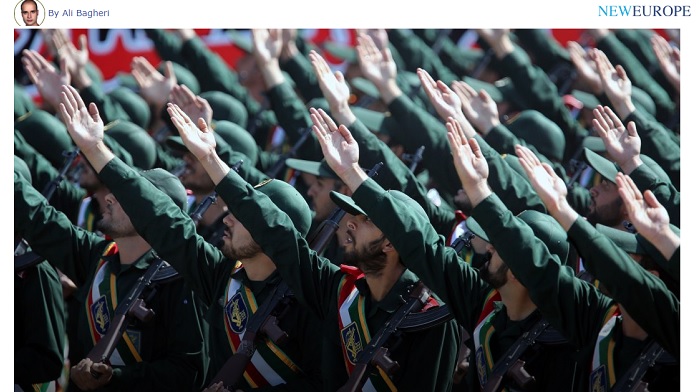 Ali Bagheri, an energy engineer with a Ph.D. from the University of Mons is an Iranian activist and campaigner for democracy and human rights in Iran and has reported about the Iranian regime in the online news media, New Europe.

He says that there has been internal oppression, terrorism, and external conflicts such as the Iraq/Iran war taking place since the Islamic Republic was established in Iran in 1979. The terrorist attacks target any group that did not support the regime. It began with Iran’s Kurdish and Sunni minorities but after a while, it spread to any individual or group which voiced its opinion against Ayatollah Khomeini.

The Iraq/Iran war which broke out in 1980, not long after the ousting of the Shah, led to the initiation of several terrorist organizations that still exist today. Bagheri reminds readers that the notorious terrorist Islamic Revolutionary Guard Corps, or IRGC, was established as a militia force in early 1979, and actively took part in the Iran-Iraq War.

(1)
Brian Hook, US Special Rep on #Iran:
U.S. Treasury sanctions on network of businesses that finance Iran’s IRGC Basij militia’s use of child soldiers is another example of how Iran’s regime is not normal. Normal govts don’t recruit & deploy child soldiers. This is child abuse. pic.twitter.com/vTQrs5XXZb

When that war was over, the IRGC began influencing Iran’s “economics, industries, banks, etc.” and that is where they accessed their wealth. Just about all of Iran’s top generals, including the now-deceased Qassem Soleimani, officials, members of the regime’s parliament, and presidents have all served in the IRGC.

In 1982 in Iraq, the Badr Organization was established by the IRGC and became an Iraqi Shi’ite militia. The Badr Organization played a key role in its support for the Iranian regime from within Iraq throughout the Iran-Iraq war. Apart from the IRGC, the Iranian regime also founded in Lebanon the Shi’ite militant group Hezbollah. It became both a military and political group following Israel’s invasion in 1982 of Lebanon. In 1994 there was a bombing of a Jewish cultural center allegedly initiated by Hezbollah in Buenos Aires, Argentina. This attack killed 85, while the 1996 Khobar Towers bombing took the lives of 19 US servicemen.

Bagheri mentions that the Iranian regime supports Hezbollah and today it controls a network involving drug trafficking and money laundering, which stretches from South America to the Middle East.

This was established in 1988 in Pakistan during the Soviet-Afghan War but a short time after the Iran-Iraq War came to an end. Javad Larijani, the Iranian regime’s Secretary of the High Council for Human Rights, admitted during a televised interview that “Our government agreed not to stamp the passports of some of them (al-Qaeda),”

This meant when al-Qaeda members transited Iran between Afghanistan and Saudi Arabia they couldn’t be apprehended or persecuted by Saudi authorities who also shielded at least one who piloted the hijacked planes of 9/11 which killed 2,977 innocent people.

Bagheri mentioned a book written by Mohammad Mohadessin called “Islamic Fundamentalism: The New Global Threat”. It provides an explanation of Iran’s agenda which was directed at controlling Iraq and preserving the Islamic State. So much is happening right now, such as Syria’s human catastrophe, the devastation taking place in Yemen, the constant tension between Israel and Palestine and the role Hezbollah is playing in Lebanon as it penetrates every aspect of life.

A new revolution is starting to evolve in Iran

One revolution didn’t solve the Middle East problems of the need for freedom of speech and democracy. The National Council of Resistance of Iran expressed its concern to the international community back in 1981 about the reason for the terrorism in the Iran-Iraq war which is based on internal conflicts that were never entirely solved after the 1979 revolution. Because the opposition to the regime was evident, the regime had to silence half of the population by making it illegal for women to go out in public without wearing a hijab. It even stopped opposition candidates from the MEK standing in the 1980 election.

The suppression of democracy was so evident in 1981 when no opposition rallies or demonstrations were allowed but this did not stop 500,000 supporters of the Mujahedin-e Khalq (MEK) from taking over several of Tehran’s streets. ‘’Khomeini, the founder of the Islamic Republic, expressed in a speech that his government’s enemy is neither the West, nor the East, but the internal enemies within.’’ MEK supporters suffered enormous casualties when Khomeini announced a Fatwa which eventually led to the slaughter or more politely the execution of 30,000 political prisoners, the majority of whom were active members and supporters of the MEK. What made matters even worse for the Iranian people was the suppressive tactics used on the intellectual community including brutal suppressions at the Tehran university throughout the ‘90s.

The UN received a joint statement, during its 44th #HumanRightsCouncil session in Geneva, urging it to take action on the Iranian regime’s historical and ongoing human rights violations by sending a fact-finding mission to #Iranhttps://t.co/prHQWyjS07@USAdarFarsi #1988Massacre pic.twitter.com/5oineivJdU

There have been a number of anti-regime protests in recent years where a clear message was conveyed and that is the people want a regime change. In 2009, 3,000,000 people congregated on Iran’s streets chanting the slogan “Death to the Supreme Leader!” Other chants took place after the protests between December 2017 and  January 2018 which were “Hardliners – reformists, the game is over!”, and last year in November the Iranian people rejecting any kind of tyranny by chanting, “Death to dictators, either Shah or Sheikh!”.

Up to now, the role the US and EU have played has not promoted a democratic movement in Iran. They have followed an appeasement policy instead which is basically supporting what they think are moderates in the regime. This is not the case as can be seen by the violation of human rights that take place on a daily basis in Iran as well as numerous terror attacks on innocent people in overseas countries.

Bagheri suggests that the only way to put an end to ‘’Tehran’s global terrorism” is that all countries should close the doors of Iran’s embassies abroad and eject any diplomats and secret agents who provide the support for the regime’s network of organized terror cells, criminal organizations, and money laundering activities.’’ There are some crimes committed overseas in relation to human rights where the Iranian assailants have not yet been subject to trials and prosecutions in international courts.

Amnesty International has made a start by interviewing survivors of the 1988 massacre whose murderers hold key positions in Iran’s government and the judiciary. If they were brought to justice, it would help to put an end to the oppressive destructive practices carried out by the regime today.

“The regime is frightened of the movement led by @Maryam_Rajavi. Your movement is visible & present because of the sacrifices of thousands of political prisoners & others.”#FreeIran2020https://t.co/O2lGA4YwPJ

The National Council of Resistance of Iran and the MEK have shown they are a viable alternative to the present regime and the 10-point plan of Maryam Rajavi covers all that is needed to claim the status of a democratic state.

Bagheri ends his report by stating that “the Iranian people need the strong will of the international community to take a firm stand against the regime and put an end to their reign of terror.’’