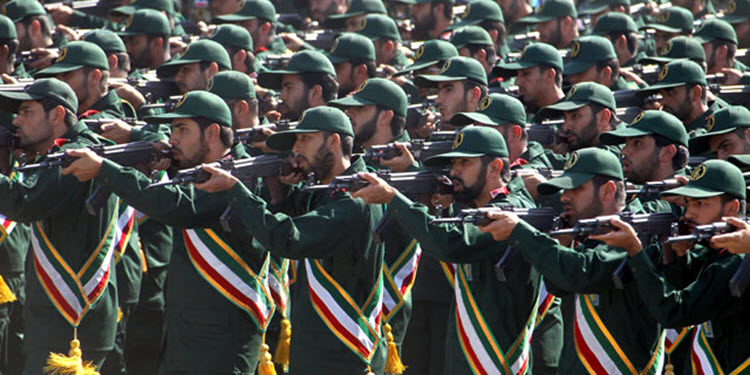 The Guards are the main force behind Iran’s nuclear program, lethal meddling across the Middle East, ballistic missile drive and domestic crackdown.

The Clarion Project, February 9, 2017, Iran has been dubbed a “de facto Islamic Caliphate” due to increasing domestic crackdown and lethal meddling across the region, especially through the Revolutionary Guards (IRGC).

Acting as Iran’s main armed force and sidelining the classic army, the IRGC has earned its reputation as an “Iranian expeditionary force for invading strategic Arab spaces.”

The Obama administration fostered a highly-flawed nuclear agreement with the theocratic regime riddled with far too many loopholes, leaving the new administration of President Donald Trump a handful of dilemmas to weigh.

The Joint Comprehensive Plan of Action (JCPOA), as the deal is known, has enabled Iran to take advantage of and engulf the entire Middle East into unimaginable mayhem, as we have unfortunately witnessed in Aleppo.

Yes, the JCPOA did suspend a portion of Iran’s nuclear program for a few years – with emphasis on “suspended” and “a few years.”

Yet, it allowed the mullahs’ to take advantage of the lame-duck period to expand their regional hegemony, increase nuclear capabilities and build their ballistic missile program.

Ever since day the day in 1979 when the mullahs rose to power by hijacking the Iranian people’s revolution, countries of the Middle East have been targets of Tehran’s endless meddling.

America’s unfortunate strategic mistake of invading Iraq in 2003 provided Iran with an opportunity it was unable to gain after eight years of direct warfare in the 1980s.

Iran flooded Mesopotamia, gaining ground links to Syria and Iraq through its conglomerate of Shiite militias . Through its lackey, the Lebanese terror group Hezbollah, it has provided an endless flow of arms and missiles to dangerous players in the region and expanded its tentacles like never before.

These menacing measures were also made possible through the West adopting a failed policy of appeasement vis-à-vis Iran. The international community, spearheaded by the Obama administration, turned its back on Iran’s atrocities against its own people and across the Middle East creating an opening for the mullahs’ further exploitation.

Iran went as far as defying the United Nations Security Council Resolution 2231 (endorsed by the JCPOA) by testing (and continueing to test) a series of ballistic missiles capable of delivering a nuclear payload. The most Washington and its European partners could muster in response was a strong letter condemning such measures as “inconsistent with” and “in defiance of” the resolution adopted by the world’s highest governing body.

One crystal clear message to Iran would be to blacklist the IRGC, which is the main force behind Iran’s nuclear program, lethal meddling across the Middle East, ballistic missile drive and domestic crackdown.

This strong and well-founded policy will send the necessary message to Iran to understand what needs changing, to thus render the ultimate change benefiting the Iranian people, all nations of the Middle East and the world over.