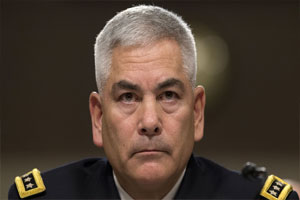 Iran is providing financial and material support to the Taliban, the commander of U.S. forces in Afghanistan said on October 6 Tuesday.    General John Campbell told the U.S. Senate Armed Services committee that his forces have received reports that Iran has provided money and  weapons to the Taliban mainly in the Herat region of Afghanistan.

Gen. Campbell agreed, saying that he did not know the exact nature or scale of the Iranian regime’s support for the Taliban.

The tense solidarity between the mullahs’ regime in Iran and the Taliban dates back years. International forces interdicted Iranian arms shipments intended for Taliban groups as early as 2007.

In addition to its provision of weapons to the Taliban, Iran’s regime pays salaries and runs at least four training camps for Taliban insurgents, according to the Washington Free Beacon.

“Iran supplies us with whatever we need,” a Taliban commander told the Wall Street Journal.