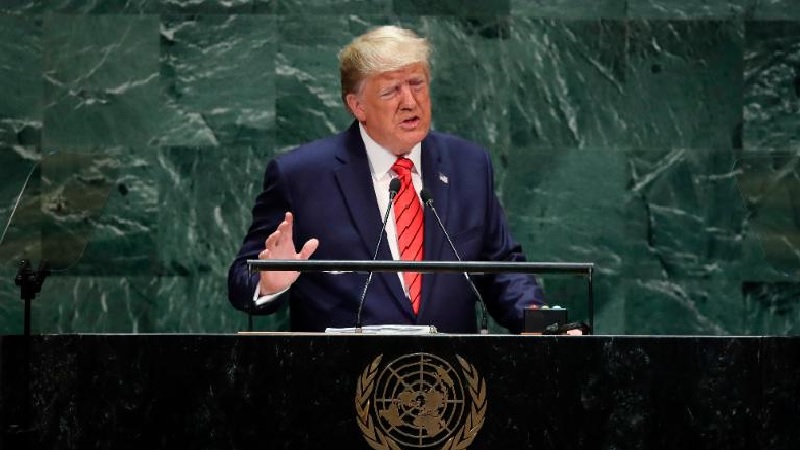 Donald Trump gave his address to the United Nations General Assembly in New York on Tuesday, with his speech focusing heavily on Iran and the malign behaviour of their Regime.

During the speech, Trump called the mullahs in Iran, one of the “greatest security threats facing peace-loving nations” and called on other countries not to “subsidize Iran’s bloodlust”.

This is a reference to the West’s appeasement policies towards Iran, which culminated in the 2015 Iran nuclear deal, which gave billions of dollars to Iran and removed sanctions on the rogue state. Trump withdrew from the deal last year and has consistently imposed sanctions for Iran’s bad behaviour since.

Trump said that after the Saudi oil attacks this month, which the US, Britain, France, and Germany blame on Iran, the US “imposed the highest level of sanctions on Iran’s central bank and sovereign wealth fund” and that he would tighten sanctions if Iran’s provocative behaviour continues.
Trump said: “As long as Iran’s menacing behaviour continues, sanctions will not be lifted, they will be tightened.”

He advised that “all nations have a duty to act” with regards to combating Iran’s influence, which may be aimed at his Europeans counterpart who agree about the majority of Iran’s malign behaviour, but still remain a part of the nuclear deal, giving Iran money that it uses to fund terrorism and suppress the Iranian people.

Trump said: “Iran’s leaders will have turned a proud nation into another cautionary tale of what happens when a ruling class abandons its people and embarks upon a crusade for personal power and riches.”

Meanwhile, also at the UNGA, thousands of Iranians gathered outside the Manhattan-based headquarters to protest the Regime’s inclusion and urge the world to reject false promises of moderation by the mullahs, noting that the Regime is incapable of change.

Dr Majid Sadeghpour, the Political Director for the Organization of Iranian American Communities (OIAC), said: “No amount of economic and political concessions can moderate the behaviour of this medieval regime. The mullahs understand only the language of power and firmness. Maximum pressure must be applied to help the Iranian people free themselves from the yoke of the mullahs.” The protestors called for a firm policy vis-a-vis the Iranian regime.

Sadeghpour said that Rouhani, who he termed a “murderous moderate”, and other Iranian officials should be held to account for the murders of more than 120,000 Iranian civilians, including 30,000 killed during the 1988 massacre, mainly MEK members.