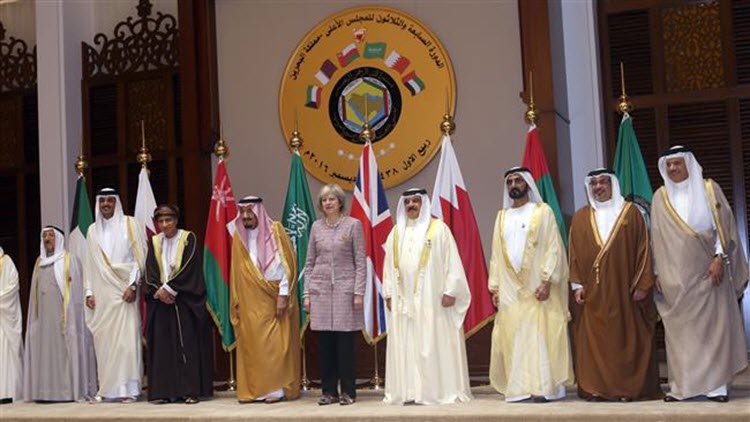 The Washington Post has reported that six Gulf Arab countries and the United Kingdom agreed earlier this week to “counter Iran’s ‘destabilizing activities’ in the region.

The news was announced after a two-day summit in Bahrain of the Gulf Cooperation Council. The countries, especially Saudi Arabia, “have watched with concern as Iran backed Shiite rebels in Yemen and supported embattled Syrian President Bashar Assad”.

The war in Yemen continues, with Saudi forces battling against rebels.

British Prime Minister Theresa May said that all parties in the agreement need to “work together to push back against Iran’s aggressive regional actions, whether in Lebanon, Iraq, Yemen, Syria or in the Gulf itself”.

In response to this, ISNA news agency (a semi-official news agency in Iran) reported that Iran’s Foreign Ministry spokesman Bahram Ghasemi said: “[The United Kingdom] is not in a position to accuse others of interfering in regional affairs. The purpose of these statements seems to be trying to sign new massive arms deals between the British and some Arab states of the Persian Gulf.”

The Washington Post noted: “In the wake of the nuclear deal, Britain and Iran have reopened their embassies in each other’s countries and exchanged ambassadors. Direct British Airways flights between London and Tehran have also resumed.”

The BBC reported on the issue too, quoting Theresa May as saying she is “clear-eyed” about the threat Iran poses to the Middle East. She highlighted that the deal was important because it neutralised Iran’s chances of acquiring nuclear weapons. However, she also emphasised that the United Kingdom will continue to work with Arab Gulf states in efforts to put an end to Iran’s ‘aggressive regional actions’.

At the summit, May said that the United Kingdom’s intention was to find a more permanent solution to assuring security in the Gulf. Over the course of the next decade the UK has pledged to spend more than £3bn on defence spending in the region.

She said: “Extremists plotting terror attacks here, in this region, are not only targeting the Gulf but, as we have seen, targeting the streets of Europe, too. Whether we’re confronting the terrorism of al-Qaeda, or the murderous barbarity of [so-called Islamic State], no country is a more committed partner for you in this fight than the UK. Just as Gulf security is our security, so your prosperity is also our prosperity. Already the Gulf is a special market for the UK.”

She added: “As we address new threats to our security, so we must also continue to confront state actors whose influence fuels instability in the region. So I want to assure you that I am clear-eyed about the threat that Iran poses to the Gulf and the wider Middle East; and the UK is fully committed to our strategic partnership with the Gulf and working with you to counter that threat.”