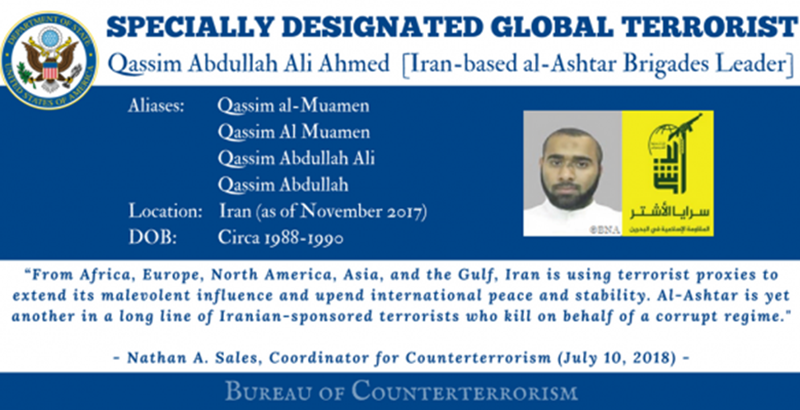 The United States has now imposed sanctions on an Iran-based militant leader, who was trying to overthrow the US-backed government of Bahrain.

The statement read: “Today’s designation seeks to deny al-Muamen the resources to plan and carry out terrorist attacks. Among other consequences, all of his property and interests subject to U.S. jurisdiction are blocked, and US persons are generally prohibited from engaging in any transactions with him.”

This terror designation would isolate al-Muamen and expose him to law enforcement authorities around the world.

Meanwhile, the Bahraini government revoked al-Muamen’s citizenship and sentenced him in absentia to life in imprison for terrorism.

This follows on from the State Department’s decision to blacklist the Shiite militant group last month for its ties to the Iranian Revolutionary Guard Corps (IRGC), where the Al-Ashtar Brigades adopted IRGC branding and worked to enhance Iran’s agenda in the Middle East.

The al-Ashtar Brigades (also known as the Shi’ite Saraya al-Ashtar) were established in 2013 and they claimed to oppose the Bahraini Sunni al-Khalifa monarchy and represent the majority Shiite population, but in reality they serve the interest of the Shiite Iranian Regime.

Al-Muamen, 29, has been on the wanted list for the US and Bahrain for a while now. Last November, Bahraini authorities said that he had ordered five terrorists in al-Ashtar Brigades to attack three oil pipelines and assassinate prominent national figures.

It is not surprising that the Iranian Regime has supported al-Muamen, given that that US State Department has listed them as the number one state sponsor of terrorism in the world. The US has imposed many sanctions against Iran since Donal Trump pulled the US out of the 2015 nuclear deal in May and promised the return of stringent sanctions on Iran related to its nuclear weapons programme and its malign behaviour across the Middle East, including supporting terrorists.

The Iranian Regime supports terrorist and militia groups across the Middle East to cause chaos and deflect from the problems that Iran is facing. However, the exorbitant amount of money that Iran has wasted on these conflicts has meant that they are now in the middle of an economic crisis, which has triggered an anti-regime uprising in the country, with the Iranian people loudly calling for the Regime to go.