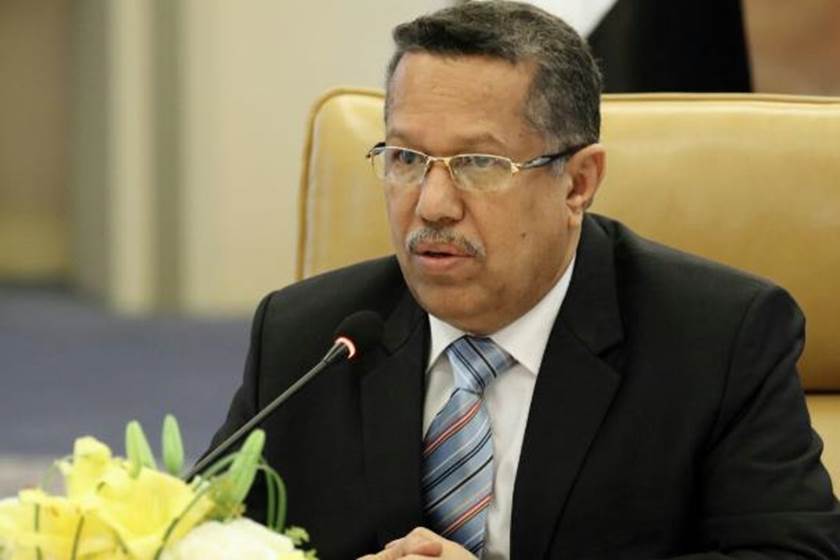 by Atousa Pilger
Saudi state-owned news channel Al-Ekhbariya reported on Friday that Ahmed Obeid bin Daghr, Yemen’s Prime Minister, said his government is moving towards regaining control of the state and extending its influence over all regions.

The prime minster said that “the determination of the political leadership – supported the Saudi-led Arab coalition – to move forward in a steady and steadfast way towards restoring the state and extending state control over all provinces,” during his meeting with the Governor of Hajjah, Abdulkarim Al-Sinayy.

The two discussed military and economic developments, as well as matters related to the affairs of the areas under the control of Iran-backed Houthi militias, according to Yemen News Agency.

Martin Griffiths, the UN envoy for Yemen, arrived in Sanaa earlier this week, for talks aimed at persuading Iran-backed Houthi militias to quit the Red Sea port city of Hodeidah.

Griffiths took over as UN envoy to Yemen in February after his two predecessors quit in frustration over the gnawing conflict that attracts few headlines and scant attention from the great powers.

He has been traveling between the Yemeni capital and the cities of Aden and Muscat in Oman in efforts attempt to find a diplomatic solution to the crisis. On Wednesday Griffiths said that Yemen’s warring parties have offered “concrete ideas” to achieve peace, after he met with Iran-aligned Houthi leaders in the capital Sanaa.

The Saudi-led coalition in Yemen launched a military offensive last month to capture Hodeidah from the Houthis. They quickly seized the city’s airport and drove the Houthis out, but halted the offensive last week due to Griffiths’ efforts that succeeded in pausing the offensive that waslaunched last month by United Arab Emirates-backed forces to take Hodeidah, a Red Sea port and main conduit for supplies to Houthi-held areas in northern and western Yemen including Sanaa.

The international community fears the offensive on Hodeidah port will aggravate the humanitarian crisis in Yemen and touch off a famine affecting up to 8.4 million people believed by U.N. officials to be now on the verge of starvation.

“All parties have not only underscored their strong desire for peace, but have also engaged with me on concrete ideas for achieving peace,” Griffiths told reporters in Sanaa airport at the end of a three-day visit to the Yemeni capital. “I am especially thankful to (Houthi leader) Abdel Malek al-Houthi whom I met yesterday (Tuesday) for his support and the fruitful discussion we held,” he said.