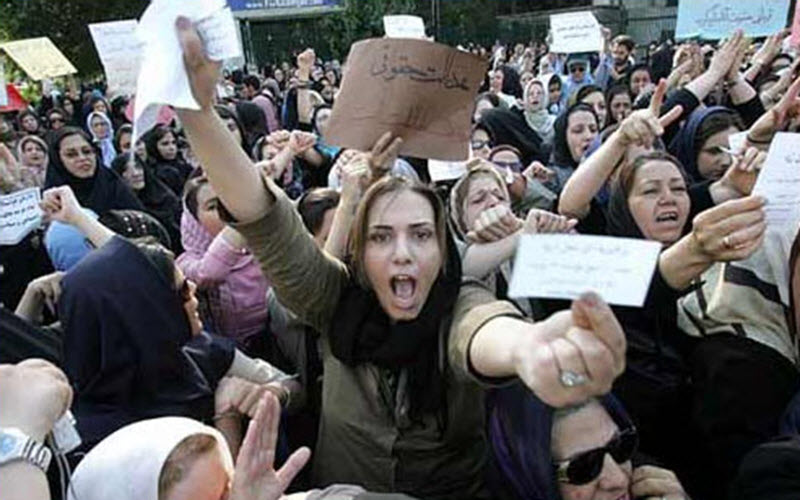 According to Dr. Majid Rafizadeh, Harvard-educated Iranian-American political scientist and president of the International American Council, “For almost 90 years, Iranian women have struggled under the Pahlavis and the mullahs and have protested against their subjugation, dehumanization and suppression.”

The role of women in the sociopolitical and religious dynamics of the Islamic Republic has been gravely overlooked. For example, the revolution was led by women who were fighting for gender equality, social justice, the rule of law, and a representative and democratic system of governance.

Following the ousting of the shah, tens of thousands of women across the country took to the streets to celebrate. However, resistance by women has been a threat to the Iranian regime ever since they came into power in 1979.

Initially, the regime made promises to improve women’s rights. Then, Iran’s Supreme Leader Ruhollah Khomeini began issuing decrees restricting women’s rights. After women realized that the tide had turned against them, the celebrations turned into protests, including demonstrations in front of the new prime minister’s office in Tehran.

Women were irate because gender laws had been changed in the constitution, including those pertaining to playing sports, child custody, citizenship, inheritance and retribution (with new rules such as allowing flogging and stoning), to name just a few. Family Protection Law had been suspended, family courts dismantled, and the compulsory veil and dress codes were imposed on all women. Many women were expelled from their jobs, arrested and tortured.

Women attempted to take back the revolution. They were met with violent attacks — with knives, bricks, stones and broken glasses.

Today, although the regime continues to try to force women into a traditional female role, they have continued to defy and resist the regime in order to close the gender gap throughout the last 40 years. Greater numbers of women now attend universities. They now constitute more than half of the university students in Iran. Many show their resistance by defying the compulsory veil. As well, social media has helped circulate images of the defiance of Iranian women against the regime’s forces. A new movement called the “daughters of the revolution” was born.

Dr. Rafizadeh writes that, “Zahra, an Iranian teacher, feminist and activist who lives in Tehran, told me that: ‘Iranian women are patient. We struggled during the shah’s era and continue to do so now. We do not resort to violence. Every minute of the day, we are peacefully resisting the theocracy and forcing it to change its laws. Without the Iranian women, there would not have been a revolution in 1979. And we will continue our struggle to change this regime as well’.”