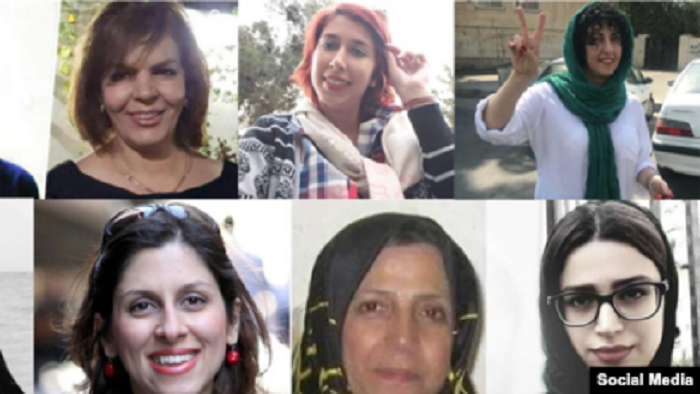 17 female political prisoners in Evin prison issued a statement condemning the arrest of aging mothers by the Islamic Republic. The detainees had gathered to protest against the conditions of their children in Iran’s prisons. The signatories of the statement described the Iranian government as a “misogynistic rule” that confronts women who struggle for freedom and justice.

The text of the statement follows:

It’s a long time that tyranny and exploitation have given nothing to the people of this land except he spreading a shroud of suppression, starvation, and poverty. All these years, an ongoing struggle for freedom and justice has continued against the dominant power. On one side is the rule of repression by all means, while on the other side stand freedom-loving men and women with all that they have, from their pens to their lives. This confrontation and struggle manifest themselves in the battle of mothers and motherhood versus the state over the years.

Where the government, despite using the maternal role of women to confine them in houses, cannot tolerate this role for female protesters:

Many women gave birth to their children and raised them in prisons; women who have even been deprived of seeing the body and grave of their loved ones [this is a reference to the 1988 massacre, a gruesome even in which the Iranian regime executed 30,000 political prisoners, mostly members and supporters of the MEK, in the span of a few weeks]; who have been sent to prison on the charge of demanding justice or freedom for their children; or have been forced to leave their babies and spent their years in prisons without any vacation; mothers who have been banned from seeing and visiting their children even in meeting halls of prisons; and restless mothers who must suffer to wait hours behind prison doors to hug their children, their most basic right.

Over all these years, the battle has continued between the misogynistic state and women and mothers who rose to achieve freedom and justice. The continuation of this battle, of course, displays the increase of knowledge, expansion of the struggle and women’s protests. There are a lot of examples. In the past few months alone, Farangis Mazloum, despite her illness, was arrested on the charge of defending her son, Soheil Arabi [Soheil is an Iranian blogger (born in 1985). He was arrested in 2013 for criticizing the Islamic Republic governing methods and was sentenced to the death penalty. He was also tortured and kept in solitary confinement for two months and then transferred to Evin prison. He staged hunger strikes in protest of the mismanagement of rulers and horrible conditions in prisons.] Mother of Alireza Shir Mohammadi lost her son in prison because she could not pay an 80-million toman bail. Raheleh Asl Ahmadi was detained on the charge of demanding freedom of her daughter, Saba Kord Afshari. And numerous other examples.

In the latest case, Gissou Ratcliffe, the 5-year-old daughter of Nazanin Zaghari, had to leave Iran after 3 years and 8 months of being away from her mom, and now lives with her father. This happened while officials were implicitly predicating the release of [Nazanin Zaghari] to the result of negotiations and accord with the British government. People, their rights, justice, and truth are in fact ignored. From this perspective, the actions of both states are two sides of a coin.

We, the signatories of this statement, while some of us have experienced the pain of being away from our children for years, announce our protest against oppressive, inhumane, and unjust treatment of women once again.

Historic experience and daily reality have proven that despite the state’s wishes, the feeling of motherhood is so strong that it can have a great impact on freedom and national development. We believe that the continuation of pressures and restrictions on women won’t defeat their resistance, and instead proves the firmness of their struggle and determination. We, the women of this land, believe that the awakened conscience of the society won’t tolerate tyranny. In the near future, with action and determination of each second, the freedom of suffered mothers of this land will be achieved.

Hand in hand, hoping for bright days, let us be the voice of detained mothers who are the turning point of the freedom of the painful conscience of the human community.