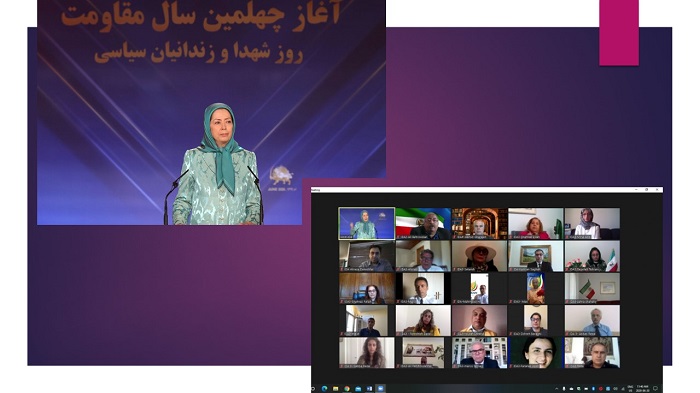 The Iranian Resistance’s supporters along with renowned global politicians came together for a virtual conference initiated on June 20th by the National Council of Resistance of Iran (NCRI) on June 20. This is to honor the start of the Iranian resistance, nearly 39 years ago.

The participants particularly emphasized their utmost support for the Iranian Resistance (PMOI / MEK Iran) and the Iranian people’s struggle to free Iran from the shackles of the tyrannous mullahs. They also supported wholeheartedly the establishment of universal suffrage and democracy.

#Maryam_Rajavi said that even though the regime is arresting, imprisoning, and even executing it is not stopping the resistance from growing mentioned the fact that the mullahs are attempting to spread lies about #PMOI #MEK #Iran https://t.co/ZtMs1rD3qY #coronavirus @USAdarFarsi pic.twitter.com/CLMUJbSaZH

Mrs. Maryam Rajavi, the NCRI’s president-elect, was the keynote speaker. She said the Iranian people were ready to overthrow the regime as can be seen by the November 2019 and January 2020 protests. She emphasized that it is now the international community’s turn to listen and support the resistance. She said she no longer wanted to see the regime take Iranian people’s money and use it to prop up their corrupt government. She appealed to the conference to support the extension of international sanctions against the trading of weapons within the region.

Indispensable to Democracy & Justice in Iran

Mrs. Rajavi continued to say that the regime should be made accountable for all the executions and murders that have taken place throughout their rule and the global community must recognize immediately that the resistance movement, Iran’s youth, and all Iranians should be supported in their right to resist all that is going on in Iran which is a detriment to the well-being of its people. She also used the conference to tell the Iranian people that the regime’s diplomat who was arrested in Belgium 2 years ago would not be set free despite the regime’s efforts.

This is linked to the regime’s planned massacre in Villepinte in Paris where the resistance movement had organized an event. Fortunately, the incident was stopped, and the terrorists were arrested. The trial is just about to begin which is a victory for preventing terrorism.  She stated in her final words that the (PMOI / MEK Iran) was still subject to continuing terrorist acts against its members.

Since the outset, we have declared that our struggle is not for taking power, but to realize the Iranian people’s desires for the establishment of freedom, justice and democracy at any cost. #Iranhttps://t.co/czxJDHGp5o pic.twitter.com/gnFsQp3jJE

Other speakers at the virtual conference included the following:

Voices and messages from the virtual conference

Senator Robert Torricelli said he was proud of the struggle in the last 30 years against the theocracy in Iran and he is waiting for a new start for the Iranian people. He said that the MEK and Mrs. Rajavi are welcomed in most capitals throughout the world.

“MEK supporters in Europe and representatives of the Iranian community abroad reiterated their support for the Iranian Resistance and vowed to be the voice of the Iranian people in their quest for freedom and democracy.”