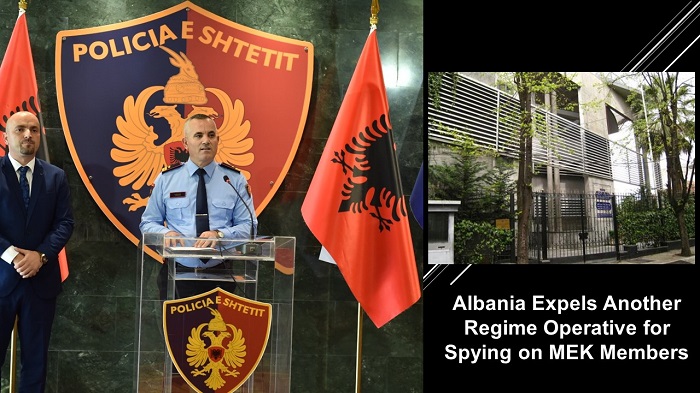 One country that has participated significantly in the movement for freedom in Iran is Albania. The Resistance has described Albania on a number of occasions as a small country with a big heart after it welcomed thousands of members of the (PMOI / MEK Iran) into its country when they were finally released from Camp Ashraf in Iraq.

At the beginning of the year, Albania announced that it had ordered the expulsion of two Iranian diplomats because the activities they were carrying out are in breach of their diplomatic status. The Albania Prime Minister described the two individuals as “persona non grata”. It was reported at the time that the activities they were involved with were endangering national security in Albania.

The agent was identified #Iranian national with Italian citizenship. He is accused of espionage and intention to penetrate the #MEK on behalf of the MOIS, expelled by Albanian security. #FreeIran2020 #ExpelIranDiplomatTerrorists #IRGCTerrorWithoutBordershttps://t.co/hPgm4NZBky

Earlier this week, it was reported that another individual has been designated as “persona non grata” in Albania and that he would imminently be expelled from the country and not allowed to re-enter for at least 15 years. The Interior Minister of Albania Sandër Lleshaj was the one who signed the departure orders. This action was taken because of his actions against the main opposition to the Iranian regime – the People’s Mojahedin Organization of Iran (PMOI / MEK Iran).

The individual in question has Italian citizenship and has been accused of espionage and “intentions to penetrate”. His orders would have come from the Iranian regime’s intelligence agency – the Ministry of Intelligence and Security (MOIS).

Reports issued by Albania anti-terrorism agencies indicated that 29-year-old Danial Kasraie is considered dangerous and a threat to public security.

The Iran regime has been brazenly carrying out espionage against the MEK members that are located in Albania. These activities have mainly been organized through diplomatic facilities.

“Another Iranian individual has been designated by Albanian authorities as persona non grata (unwelcomed element) for his actions against the Iranian opposition People’s Mojahedin Organization of Iran (PMOI/MEK) in Albania.”#Iranhttps://t.co/SrAegv3t8B

Danial Kasraie had, on a number of occasions, tried to recruit both current and former members of the MEK and he has been spotted many times outside Ashraf 3, the MEK’s complex not far from Albanian capital Tirana.

The Security and Counterterrorism Commission of the National Council of Resistance of Iran (NCRI) reported at the end of last year that Danial Kasraie had been posing as a reporter. He had also been presenting a fake ID document making it look like he was working for the Albanian secret police.

And just before this, the NCRI reported that the Chief of Police in Albania had announced the uncovering of a terrorist ring with strong ties to the Iranian regime.

Two years ago, the Iranian regime had attempted to bomb a gathering held by the MEK in Albania. Authorities in Albania foiled the plot before an attack took place, but it resulted in two Iranian diplomats being expelled. At the time, authorities in the country explained that the Iranian ambassador and another diplomat were “violating” their diplomatic status.

It is essential for the Iranian regime’s foreign operatives to be expelled from Europe, and the IRGC and the MOIS must be included on the EU terrorist list. Furthermore, the Iranian regime’s representations and embassies must be shut down because they are used as centers for espionage and terror-related activities.