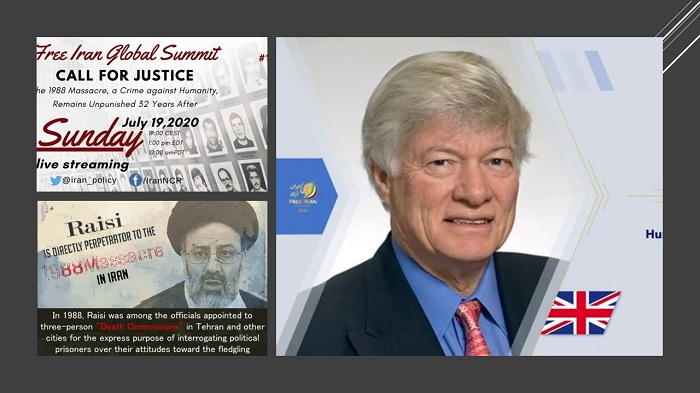 July 19th, according to Morgan Ortagus, the US State Department’s Spokesperson, marks the anniversary of the beginning of Iran’s Death Commissions as ordered by Ayatollah Khomeini, which resulted in the execution of 30,000 political prisoners.

He said that all Iranian officials who breach human rights should be brought to justice.

Instead of upholding justice, the Iranian judiciary oppresses and violates human rights. We urge the international community and individual governments to provide accountability and pursue justice for the regime’s many victims. pic.twitter.com/Mr0HpJuJ5g

It is time now that European countries came together, which was emphasized by 31 United States dignitaries who spoke out at the 3-day “Free Iran Global Summit.” They demanded that the Iranian regime should be held responsible for all its crimes against humanity.

#Iran’s #1988Massacre of the #MEK
Geoffrey Robertson QC: There wasn’t accountability because the U.N. was weak at that time… and failed then in its duty. We must hold these people accountable because many of them are still alive. #HumanRights https://t.co/phktYUqsIl

They further advocated that all governments should be dispatching fact-finding teams to Ashraf-3, Albania, which is the headquarters of the People’s Mojahedin Organization of Iran (PMOI / MEK Iran) and listen to what 900 political prisoners have to say.

32 years ago, following the regime’s defeat in the 8-year Iran-Iraq war, Ruhollah Khomeini, as the regime’s supreme leader, was compelled to drink the ‘chalice of poison’ of a ceasefire and bring the war to an end. When the ceasefire was accepted the mullahs’ regime made a decision to slaughter political prisoners in order to neutralize the costs of drinking from the ‘chalice of poison’ and failing in the war and to bully Iranian society.

As a result, Khomeini handed out a terrible fatwa, that any MEK prisoners who “remain steadfast,” would be executed in every prison throughout the country.  As a result, more than 30,000 political prisoners were murdered.

Features of the 1988 massacre

Geoffrey Robertson QC, former appeal judge on the United Nations Special Court for Sierra Leone, said of the 1988 massacre that it was the “Worst crime against humanity since the Second World War.”

Sir Geoffrey Robertson QC & Frm UN judge: The world and I didn’t know of #1988Massacre it’s the biggest crime after mass killing in concentration camps. Those who said no were put in lines and taken for hanging. Families were kept in the dark #EndImpunity https://t.co/wwJWWWedVJ

Thousands of prisoners were told they could choose their own fate which would be either freedom or death. All they had to do when asked a question was to say they did not support MEK. However, few did this but bravely said they supported the MEK so they lost their lives as a result of this.

Even after 32 years, the U.S. State Department confirmed today that because the 1988 massacre was a crime against humanity there is no statute of limitations in force. Also, this verification of the truth reflects the human conscience in today’s world.

It is exactly the same as 32 years ago following the massacre of political prisoners where victims chose to support the MEK. Forty years of resistance has followed where people did not choose to surrender but chose to be martyrs for freedom. This road to freedom has persisted and the MEK will continue until a free and democratic Iran has been established.