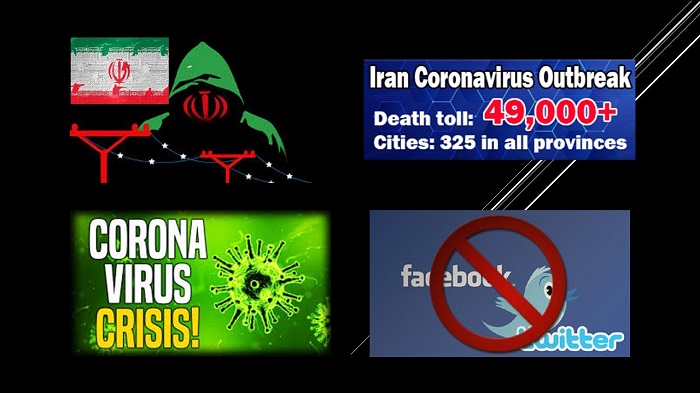 The clerical regime has put the number of people infected with coronavirus in Iran at 151,466 and the death toll at 7,797.

Iranian President Hassan Rouhani says the virus was discovered on February 17 and that he informed the people the same day. But a dozen documents released by the Mojahedin Khalq Organization (PMOI / MEK Iran) show that they have been aware of the issue since January 25.

Following the November 2019 and January 2020 uprisings, the regime had a clear interest in celebrating the anniversary of the 1979 Khomeini revolution on February 11, 1979. They even tried to keep the so-called parliamentary elections secret on February 21, but the dimensions of the pandemic made it impossible. For this reason, they focused their efforts on lowering the number of patients and deaths.

#Iran #Coronavirus Outbreak: Since the beginning of the #Covid_19 crisis, the regime’s officials, particularly supreme leader Ali Khamenei and President Hassan Rouhani, have been conducting a cover-up policy parallel with negligence and inaction.https://t.co/PnONQkdfBh

One reason for the rapid growth of statistics is the regime’s multiple policies for quarantine. After a delay in the Qarantineh in Qom, the center of the disease, the regime was forced to declare quarantine and social restriction before the Iranian New Year on March 21. But a short time later, fearing the “collapse of the economy,” economic activity resumed, and the cities returned to their former state, despite the fact that all experts saw it as the equivalent of a catastrophe. As a result, the second wave of disease outbreaks has resumed in many provinces and its outcome cannot be predicted. :

– The Minister of Health Saeed Namaki has said: At present, the population of the country, which has not yet contracted the disease, is more than 90% in many areas. If something new happens and, God forbid, this problem causes a new disease in the country, it will be really hard and breathtaking for me and my colleagues.

– The President of Kermanshah University of Medical Sciences, referring to the rapid progress of Corona after the resumption of work in the province, said that with the continuation of this process, 46% of the province’s population and 47.5% of the country’s population are expected to be affected by Corona.

– Massoud Younesian, an epidemiologist and professor at the Faculty of Health of Tehran University of Medical Sciences, said that the actual number is about 20 times higher than what is reported.

– Qassem Jan Babaei, Deputy Minister of Health, says that since the beginning of the corona outbreak, more than 10,000 medical staff, including doctors and nurses and other loved ones active in this field, have been infected with Quaid 19 … The regime itself says that it is between 10 and 20 percent. Considering the deadly dimensions, it shows the casualties of the medical staff. Dr. Mahboubfar, a member of the Corona staff, said that Iran had lost a significant number of its medical staff to the disease, making it the world’s largest.

“If 40 percent of the population has antibodies, we’ll be a little relieved, but we haven’t gotten to that point yet,” Rouhani himself said on the 30th. Find a percentage of immunity!!

Various cities in the country have returned to red.

Considering the dimensions of this crisis, which is also evident in the words of the regime’s officials, it can be concluded that the regime is not in a normal crisis but in the face of a huge crisis.

But what is the reason for the regime’s capture of unrealistic statistics and why does it not allow the expression of reality? Doesn’t the regime want the truth of the massacre to be revealed and covered up?

No, the reality can be much more serious. The reason why the facts of the massacre and the crisis for Khamenei and the Rouhani are blurred is that if the facts are stated and the magnitude of the human losses is acknowledged and reflected everywhere, people are asking the regime a big question: why?

This issue must be seen in the context of a fateful battle in which the regime can defeat the great Crown and its people and the Iranian resistance (PMOI / MEK Iran).

If the regime falls short of the strategy of covering up and downplaying statistics, it must answer why it did not implement the quarantine system from the beginning so that the people could be protected against this wave of disease and its spread.

Rouhani must also answer why, in spite of the widespread opposition of the people to end the restrictions and return to his work, he violated all these rules without considering the interests of the people and sent the people to the brink of death. At the same time, it must now refrain from bringing people back to work and normalizing affairs.

In that case, the government will have to pay the minimum wage.

Given that oil revenues have plummeted, and the government has increased its tax revenues to compensate for such a shortfall, adopting a strategy that reduces government tax revenues will greatly increase the likelihood of absolute depreciation and depletion of government taxes.

In this regard, Rouhani said without compliments, “The security of the society is our principle. “All our armed forces, our border guards, our police are all on the scene, and if security is to be compromised, it doesn’t make sense at all.”

If this method of work is implemented, it will lose another source of income, which is the sale of gasoline, ie 200 billion tomans per day. As a result, it must seize the assets and wealth accumulated in Khamenei’s executive headquarters and the foundations belonging to Khamenei’s house, the IRGC’s cooperatives, the Basij, and the police, and reduce security and maintain order.

In this way, this area becomes a battlefield between the regime and the people. That is, on the one hand, the regime must not respond to its past repercussions, which are the result of widespread popular protests, and on the other hand, it must change its line of action and regulate at least the interests of the people and not the system. Be. In this way, the issue of statistics and the expression of facts in this regard is directly related to the main red border of the regime, which is the uprising of the people. For this reason, to maintain this red border, it goes as far as necessary:

The regime ruling #Iran is deeply concerned over the activities of the Iranian opposition PMOI/MEK on social media, according to an article published in the Al Hurra website on April 28.https://t.co/jJYUWlF5q6

On, April 30, a spokesman for the regime’s armed forces announced that 3,600 people who had spread rumors in cyberspace had been arrested by police and the Basij.

State-owned Entekhab daily on May 9 quoted the police chief saying that more than 1,300 websites had been identified and 320 arrested.