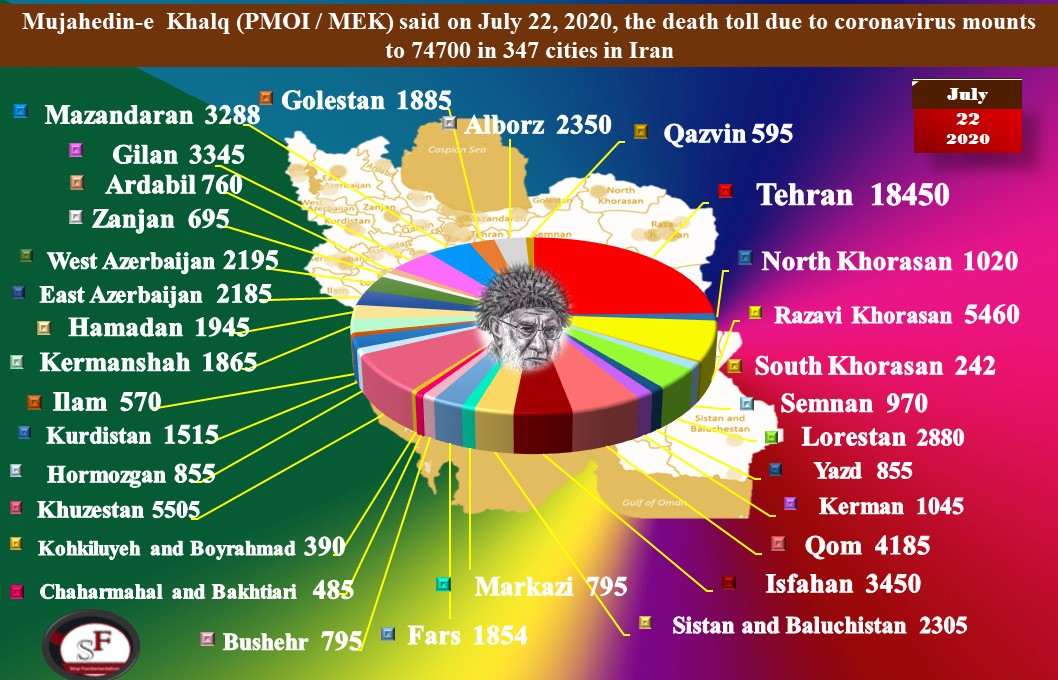 The Covid-19 death toll in Iran has now reached 75,000 according to figures secured by the People’s Mojahedin Organization of Iran (PMOI / MEK Iran), the main opposition organization.

The death toll has been calculated from figures sourced within Iran in nearly 350 cities across the country. The list of deaths by province, caused by succumbing to Covid-19, is given below. This list of provincial deaths is by no means exhaustive.

Over 74,200 people have died of the novel #coronavirus in 347 cities checkered across all of #Iran’s 31 provinces, according to reports tallied by the Iranian opposition PMOI/MEK as of Tuesday afternoon local time, July 21.https://t.co/pnlkFgJQEi

In Mazandaran, daily hospitalization has increased three times daily, and ten cities have been added to the red cities of this province.”

As the mullahs’ regime refuses to allocate funds to deal with the Coronavirus, the situation in hospitals is deteriorating day by day.

Sadegh Shahbazi, a regime parliament deputy from Nahavand, told the state- Radio Farhang, “The lack of medical equipment, including CT scans, MRIs, ambulances, as well as the lack of medical staff, especially infectious disease specialists, have forced people to go to nearby cities for treatment.”

Another regime parliament deputy from Gonbad Kavus, Amanghelich Shadmehr, told the parliament’s affiliated news agency, “The officials have learned to blame the people for everything… The (government) officials must explain what actions they have taken and what are they doing now? How many ICUs have they provided? For how long should people die while waiting in line for an empty ICU bed? How much ventilation have they provided? People died of hypoxia. They must explain how much medicine have they prepared?

Drugs are available on the black market in abundance at exorbitant prices. How many shelters or tents did they provide for the poor? How much free mask did they give away? How many disinfectants did they give to the deprived people?

People cannot even buy a mask. Come to your senses. It seems like they have taken an oath to kill all the people !!!” He added, “Health insurance fees are beyond what people can bear. They are asking 800,000 tomans per person for the renewal. Think about these poor people.”

Hassan Rouhani, who has so far denied any medical or health shortages, said today, “The Coronavirus problem will not be solved any time soon. We have a long way to go.

In the coming months, we will have more hospitalizations than what we have had in the past four or five months.

In this situation, we must prepare ourselves in terms of hospitals, beds, as well as doctors and nurses.

We have to know that a heavier burden is on our shoulders in the future.”