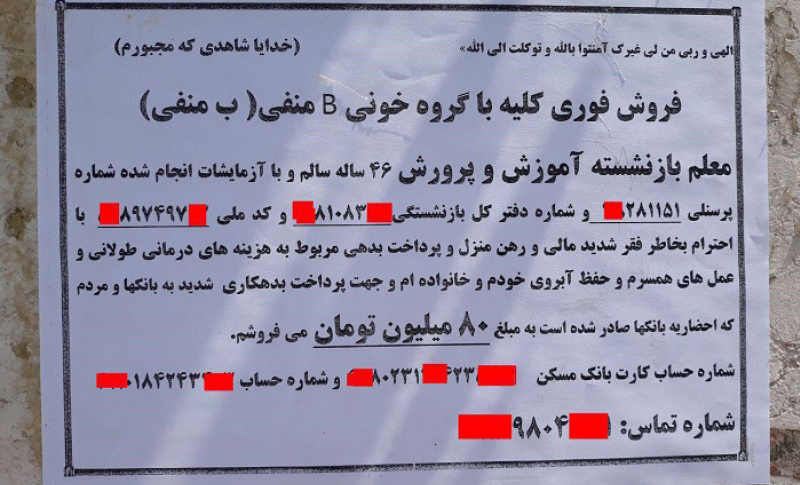 Shocking reports from Iran indicate that there are thousands of people in Iran willing to sell their organs in order to make ends meet. The practice has shocked the international community but it is becoming more and more commonplace in Iran.

More people than ever before are falling into extreme poverty – or the absolute poverty category as it is known. Absolute poverty is when a household’s income is below a specified level meaning that the family is unable to meet the most basic of needs including sustenance, clean and potable water, healthcare, shelter and education. The United Nations defines absolute poverty as a major deprivation of basic human needs that is not just dependent upon income, but also on access to services.

The economic situation in Iran has been declining over the years, even though it should have increased in recent times because of the sanctions relief and the billions of dollars that were freed up when the Joint Comprehensive Plan of Action (JCPOA), or 2015 Iran nuclear deal, was signed. However, the regime plundered this, along with the rest of the country’s wealth, on terrorist and belligerent behaviour around the world.

Furthermore, for decades, the regime has been responsible for widespread corruption and disgraceful mismanagement that it has failed to address and remedy.

This is leading thousands of Iranians to take truly desperate measures. The organ harvesting market has been dealing with the trade of blood, corneas, livers, kidneys, lungs, blood and bone marrow.

The main opposition to the Iranian regime, the National Council of Resistance of Iran (NCRI), has exposed information about this shocking practice that is becoming increasingly common.

The organisation has said that it is a big enough market for so-called brokers to get involved. The brokers facilitate the sales and purchases of organs and even go around hospitals to get in touch with the families of brain-dead patients in a bid to purchase their organs.

Brokers have said that they can make upwards of $50,000 per month in this trade and they are working to streamline the process. This involves facilitating the process for both buyers and sellers and ensuring that pertinent information is displayed on websites, such as blood type and personal details.

The NCRI drew attention to the case of a PhD student in his thirties that has advertised his kidneys so that they can pay for care for their disabled parent.

In a report on the practice, the NCRI said: “The tragedy of Iranians, especially the youths, selling their body parts to survive or to address their own basic needs or those of their families in a country like Iran is an untold catastrophe.”