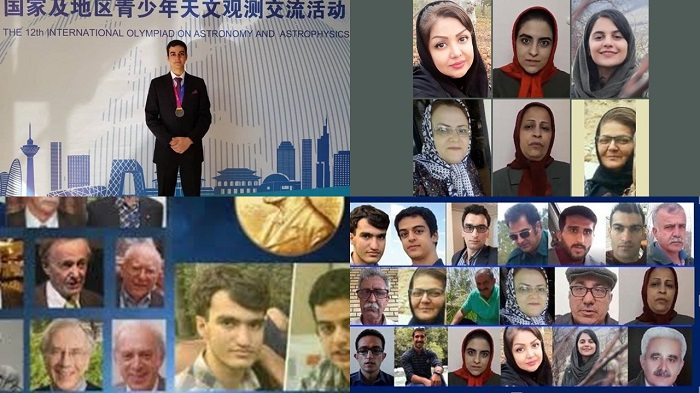 The two elite students arbitrarily detained in Iran since April 10 are still being denied legal representation and visits with their families.

Ali Younesi and Amir Hossein Moradi have been tortured to extract false confessions and held in solitary confinement for nearly two months, before facing an interrogation during a general meeting of prosecutors, intelligence officials, and related people on July 14, but they were still denied access to their lawyers and none of their relatives were allowed to attend.

More international condemnation for the #Iranian regime’s arrest and torture of elite students Amir Hossain Moradi and Ali Younesi, along with 18 other people, for links with the Iranian opposition group (PMOI/MEK Iran).https://t.co/vqWgPkhLtD #Iran #MEK #NCRI @USAdarFarsi

The pair were besieged with questions from the interrogator, as well as judicial and intelligence officials, who tried to force them to confess to some of the charges.

Younesi’s brother, Reza, wrote on Twitter that “the role of interrogators in [the] group interrogation session” was played by “so-called” professors and students “who are fully tied to security forces”. He stressed that even in this horrific interrogation session, the two young men “did not accept their charges”.

the Islamic Association of students wrote in their report that Younesi had said that the only thing he wanted was for his case to be taken “out of the Intelligence Ministry” so that he could defend himself in court.

He also refused to be interviewed on television, as it was clear that the regime just wanted them to give televised confessions, while Moradi said that he couldn’t say all he wanted to in just a few minutes.

The mullahs are deliberately seeking to eliminate political prisoners including Amir Hossein Moradi and Ali Younesi by the #Coronavirus which serves them as a replacement for executions. Otherwise, they could have adopted preventive measures against the deadly virus. #Iran

The judicial officials showed several videos of “sabotage” acts during the meeting that they claimed Younesi and Moradi had carried out, even though the Sharif University of Technology Students’ Islamic Association reported that the faces of those in the video “were not identifiable” and that neither man had said that he was in the films.

Younesi’s sister tweeted on July 22: “It has been 31 days since the 72nd day of his arrest, when we were informed that the case investigator, Jafari, has selected a public defender from the list of security lawyers, without the consent of Ali Younesi and Amir Hossein Moradi and their families. At the same time, my father objected to Jafari, and later Ali said in a phone call that he had not accepted the public lawyer. But Jafari said you have to accept and there is no other way.”

She continued: “The public lawyer (Reza Dardizadeh) that you have appointed is more paving the way for the scenario of the security forces than defending my brother!!!”

Younesi and Moradi, both 20, were arrested on April 10 and their whereabouts were not known until May 5.

2018 & 2017 International Olympiad gold & silver medalist on Astronomy & Astrophysics, Younesi and Moradi were both arrested on charge of sympathising with #Iranian Resistance group, the People’s Mojahedin Organization of #Iran (PMOI/MEK) https://t.co/Xx9fBhO9Aj

On May 5, the judiciary’s spokesperson Gholamhossein Esmaili accused the two students of having ties to People’s Mojahedin Organization on Iran (PMOI / MEK  Iran), and of pursuing “destructive” actions.

On May 7, the National Council of Resistance on Iran (NCRI), published the names of 18 other “supporters” who were arrested over the past few months.