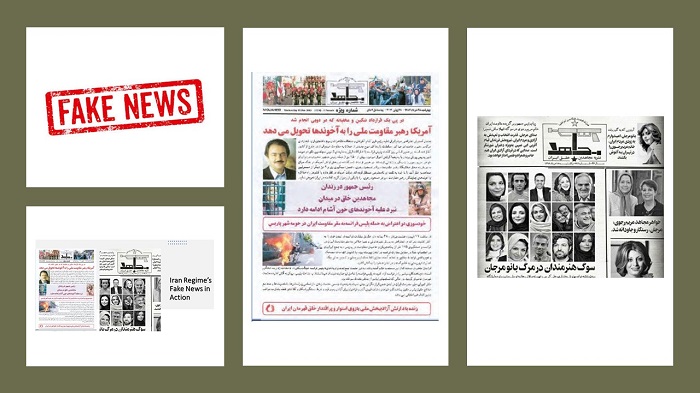 The Iranian Ministry of Intelligence and Security (MOIS) has been involved in sending fake emails and messages to the supporters of the Iranian Resistance in an attempt to wake psychological warfare against the (PMOI / MEK Iran) and infect supporters’ computers with malware.

The latest attempt to send these malicious messages coincided with the International Conference organized by the Iranian opposition at Ashraf-3 in Albania. One of the fake messages included a “call for 2020 Grand Gathering for an uprising and a Free Iran.” This is a reference to the annual meeting of the Iranian Resistance, but the aim was to spread malware, not to inform.

A fake email was forged by the regime’s Cyber Intelligence Unit, apparently emanating from the People’s Mojahedin Organization of Iran (PMOI / MEK Iran) Deputy Secretary-General, Ms. Badri Pour-Tabakh, with the message: “you have probably seen the regime’s recent ploys on the resistance’s satellite TV (Iran NTV) in trying to send thousands of Basiji mercenaries under the guise of MEK families to Ashraf 3, in Tirana (Albania)… An example of their communications is attached for you to show the proper reaction.

#Iran‘s regime fake news: Desperate and crisis-ridden regime grabs at straws in fear of the Resistance and uprising
Forged Emails and Messages by Iran’s Ministry of Intelligence and Its Cyber-Terror Unit#FreeIran2020 https://t.co/YTvfGBFJ8j

Forward this message to all supporters and contacts. Signature: Badri”. The message, again, was a fake. In another fake message, there was an attempt to fool supporters of MEK that it was coming from the Foreign Affairs Committee of the National Council of Resistance of Iran (NCRI).

The message, supposedly from a Mr. Farzin Hashemi, said: “You had previously taken the efforts to sign the statement against Mesdaghi in 2014. Would you mind reaffirming your signature on a newly dated statement, making it firmer and more up to date? Thanks, Farzin.”

The message referred to a statement from 600 political prisoners in Iranian prisons, denouncing an MOIS agent, Iraj Mesdaghi. The aim of the fake message was to undermine the statement and programs that had been broadcast by the opposition’s own TV channel, Resistance TV. After an emotional farewell to well-loved Iranian singer-in-exile, Marjan, the regime faked a copy of an outdated MEK newspaper called “Mojahed.”

The release of this fake newspaper was on June 7th this year, years after the MEK had switched to using the Internet for news about the resistance movement. The newspaper published many photos of artists and athletes in Iran who the magazine said were all supporters of the MEK. A fake tweet impersonated the President-elect of NCRI, Mrs. Maryam Rajavi, on June 17th. It emanated from a website affiliated with the MOIS.

The aim of the tweet was to persuade thee Bazargan city council to drop its intention to rename a city street in Tehran in the name of Mehdi Bazargan. Bazargan was an early Iranian prime minister after the 1979 Revolution who resigned in disgust at the extremist policies that Supreme Leader, Ayatollah Khomenei, and the Iranian regime were imposing on Iran.

On July 17th last year, the MOIS was implicated in sending out another fake Twitter message purporting falsely to come from the French Consulate-General in Jerusalem. The tweet falsely mentioned that Mrs. Maryam Rajavi was making a visit to Israel. This time, the tweet was denounced by French authorities who recognized that “the Consul General of France in Jerusalem, Mr. Pierre Cochard, has been subjected to identity theft on the social network Twitter.”

Another tweet from MOIS agents on the 30th of October 2019 falsely claimed that “the head of the French presidential office has announced that the MEK will be expelled from France soon!” The Elysee Palace in Paris denied sending out the report and said that expelling the MEK was not an official policy in France.

The NCRI’s Security and Counter-Terrorism Commission would like to remind everyone, but especially supporters of the Resistance and the MEK, that these fake emails, tweets, and other messages are unlikely to stop any time soon as they represent a regime that is failing desperately to cope with its failures.

It advises all its supporters who receive fake messages not to reply to any of them or download them as they may contain malware that could infect their computers. Any cases of fake messaging should be shared with the offices of the MEK.