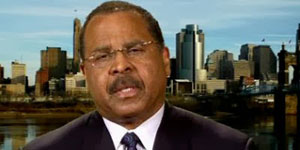 Ken Blackwell, a former US ambassador at the UN Human Rights Commission and Mayor of Cincinnati, on Monday urged the Obama administration to change its Iran policy to reflect the wishes of the Iranian people. In an article in TownHall, Blackwell said “the regime we are dealing with today is the same violent, religiously extremist regime that drove so many of its citizens to flee the country or face death after the Iranian Revolution.”

“The Islamic Republic has its hand in a number of regional conflicts, in addition to its long-standing support for Middle Eastern terrorist groups. And of course this comes at a time when Iran could also be on the verge of potentially inking an agreement with six world powers which would give it relief from sanctions related to its work on nuclear weapons technology,” he wrote.

“If you are paying attention to the Middle East, and thus to Iran, it would be prudent to also pay attention to France later this week. If you keep your eyes on Paris on June 13, you will witness to a powerful demonstration of opposition to Tehran’s clerical regime. The rally organized by the Iranian Diaspora in support of the opposition National Council of Resistance of Iran is enormously relevant to questions about how Western policymakers should be dealing with the Islamic Republic during this complex time.

“On June 13, the NCRI with the People’s Mojahedin Organization of Iran (Mek), the principal organized opposition at its core, will speak with one voice on behalf of these people and their long experience in fighting that regime.

“It is my hope that this event will be the site of even greater foreign support for NCRI – not just among politicians and academics, but also among members of the American public who care about the future of Iran and its people.

“I agree with Mrs. Maryam Rajavi, president of NCRI, that the nuclear negotiations have been misguided at best, and have resulted in the US giving away crucial leverage that might otherwise have led to massive positive change from inside of Iran. The trouble with the narrative provided by President Obama on Iran has absolutely failed to make the distinction between the people and the government of Iran.

“Of course, that distinction should be obvious. The government does not speak for the people, while the people despise their repressive government. The Iranians in the resistance are worth listening to. They are overwhelmingly pro-Western and pro-democracy. The oppose the mullahs who keep raising their demands at the negotiating table, while directing global terrorism, holding Westerners hostage, and expanding their human rights abuses at home.

“Americans should closely follow coverage of the June 13 rally in order to understand why the current American policy on Iran is wrong,” Blackwell said.